Can escape sequences be entered directly from keyboard to terminal for VT100 and similar?

I'm trying to understand how video terminals worked by the example of the VT100 family. 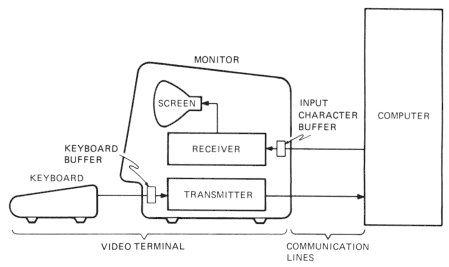 What I understood so far:

First of all, are these assumptions correct?

Control functions associated with VT102 control characters and escape sequences include positioning the cursor on the screen, deleting text on the screen, and setting display attributes (like text colour or font style). This allows applications to control what the user sees on the terminal screen (for example, vi redraws the entire terminal screen when it is started).

Now, my question is, are these control characters and escape sequences only meant to be sent from the application to the terminal? Or is there a way that a user enters them directly into the terminal, e.g. via the keyboard?

The Transmitted Characters section of the VT102 user guide describes all the characters that can be generated with the keyboard. They include control characters and some escape sequences. Are all these characters always sent to the computer without interpretation by the terminal?

Or is there a set of control characters or escape sequences that the terminal directly interprets when the user types them on the keyboard (maybe a reduced, different set)?

This is a diagram of the VT102 in off-line mode (i.e. when not connected to a computer), see here: 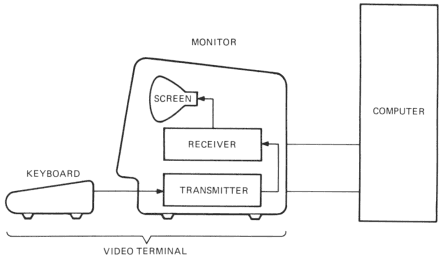 This makes it obvious that in off-line mode anything typed on the keyboard is directly re-routed to the receiver, and thus probably treated as if it would come from the computer.

My question was if in on-line mode (see diagram above) any control characters pressed on the keyboard are directly interpreted by the terminal rather than being sent to the computer?

Well, as usual with complex matter the answer is a mixture of Yes/If.

First of all, are these assumptions correct?

Yes, the assumptions stated are perfect good and correct. In general. In detail there can be diversions, most depending on line characteristics (like blocking and error correcting modems), and ways the computer/its OS is designed.

Now, my question is, are these control characters and escape sequences only meant to be sent from the application to the terminal? Or is there a way that a user enters them directly into the terminal, e.g. via the keyboard?

Yes, there is. And you presented already all parts necessary.

every key press is right away handed to the receive function and interpreted. THat way one can try out whatever function combination needed without much software tools. Well, at least that's the way we did it to check functions and parameters when debugging :))

Or is there a set of control characters or escape sequences that the terminal directly interprets when the user types them on the keyboard (maybe a reduced, different set)?

No. None at all. Wouldn't make much sense anyway. Either output displayed (characters and operations) is controlled by the host, or the host just interpretes the input, assuming everything the user does is legal anyway - or doesn't care what's displayed anyway.

Especially the later may seem strange, but it was quite handy back then to keep programs simple. Why care for stuff a sane user wouldn't do anyway.

https://www.pcjs.org/devices/pc8080/machine/vt100/ has a vt100 emulator. Once you've selected the "emulator" screen press:

F9 - Leave setup to change into local echo mode, then type away....

Somewhat later, it was discovered that it was useful to have a reasonably-convenient key that would allow a user to "escape" from an operation, and when using interactive applications that didn't need to use the escape character for those other purposes, the escape key was handy for that.

Unfortunately, these two usages sometimes collide, with terminals sending a sequence like esc-leftbracket-A when a cursor-up key is pressed, but with some applications wanting to use escape as a directly-functional key. There are two ways this can be handled:

For applications that interface to a keyboard without having to go through an octet stream, there may be superior ways of handling keyboard input. Under MS-DOS, for example, the "get keystroke" function reports both the ASCII character and the identity of the physical button that was pushed to produce it. This allows for a much wider and more useful range of keystrokes than would be possible using a mere octet stream, but not all operating systems support such things.

An ESC character can be represented by the Ctrl-[ key combination. Thus to move one position right you press Ctrl+[, then [ and then C.

Further behavior will depend on where characters go. If they go to remote computer, then that computer will process characters and reply back (e.g. echo) with respective command back to your terminal screen.

And I am sure there's a loopback mode when you type characters and terminal shows them on your terminal's screen.

Not the answer you're looking for? Browse other questions tagged terminal vt100 escape-codes or ask your own question.

14
What happens on a VT102 when you use delete character on a reverse video line?
13
What is the prototype of the Eastern Bloc videoterminal Videoton 340?
21
When you type on a computer terminal, how are the characters displayed on the screen?
3
Basic test for a RS232 serial terminal
3
How did overstriking on printer terminals work?
24
Did terminals (e.g. VT100) require a terminal driver on the host computer?
9
What happens when a terminal (like a VT100) is connected to a computer?
10
What was the largest resolution supported by terminal escape codes?
7
Different escape codes for the same keyboard keys — where did they come from?
13
Using only one terminal, can I interrupt a process that's hung on very early Unix versions?