How can a peripheral work on both the ZX81 and on the ZX Spectrum? 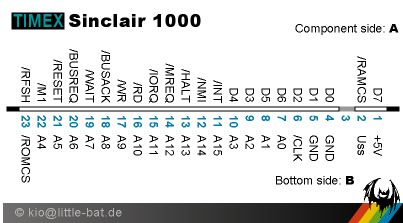 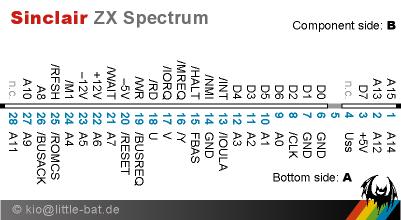 What I find puzzling is that although the lines have been moved around, the printer works on both machines.

For example, the notch that makes sure you don't insert something upside down is #5 on the Spectrum, and #3 on the ZX81. So the offset is 2. That makes sense, as A0 through A3 and the data lines are all shifted along by two. Same deal with /RFSH and /M1. But then, for example A11 has been moved way over the other side. And /BUSREQ is now +12V, I can picture that being dangerous.

How could devices like the ZX Printer keep working on the later computer? Why did they "move stuff around"?

The ZX printer is, like just about anything that carries the Sinclair label, a very minimalistic device - It only needs very few lines from the computer to actually work:

Beyond the above, power and GND, nothing else is actually connected between the computer and the printer. All of the above signals are in the same places (with respect to their distance from the connector key and PCB side, not the pin numbers) on both the ZX81 and the ZX Spectrum, all other signals are simply not connected in the printer - Absolutely nothing dangerous here.

Looking at the diagrams you provided, the data pins, interrupt pins, some of the ground pins, and +5v are all physically in the same place (imagine pins 1 and 2 on the Spectrum pinout being chopped off).

On the assumption that those are the only pins needed, provided the printer connector has empty space to accommodate the two extra pins on the left and right of the Spectrum interface, and doesn't connect the pins for things like +/- 12 volts to anything, then everything is good.

According to this page: RC2014 ZX printer interface the printer is only using the data-bus, /IORQ, /RD, /WR and address A2. All of these will be correctly connected in both cases. The site also claims that the original ZXprinter might not work, since it also used a +9 volt connection from the computer. As I understand from ZX80/81 edge connector ther +9 on ZX80 and ZX81 was the Uss in the pictures in the question. On a Spectrum, that was not connected on all versions. (ZX Spectrum edge connector)

Not the answer you're looking for? Browse other questions tagged zx-spectrum zx81 or ask your own question.

24
Blue and yellow stripes on the screen when loading from tape on ZX Spectrum
17
How do high-resolution graphics work on the ZX81?
3
Can S-100 cards attach to the ZX machines?
8
Largest memory peripheral for Sinclair ZX81?
5
(How) can I boost my ZX81 video output with an external device?
11
Is it possible to PRINT AT 23,0 in ZX Spectrum BASIC?
7
Why does the .z80 emulator-snapshot format have separate fields for the 8-bit refresh register and bit 7 of R?
3
How do I navigate the boot menu in later model Spectrum emulators?
5
How does the Spectrum +3 know whether a disk is bootable or not?
9
Can you switch the ZX81 ROM to RAM w/o write protecting it and still use ZX81 BASIC?