Why did the Apple III not support the color red?

I was playing around with an emulated Apple /// and while looking at the color demo I noticed that unlike the Apple ][, the /// did not implement red as one of its supported colors.

Ignoring strange color systems like CGA or "close implemented" ones like the VIC (II) chips, I find it puzzling that a system wouldn't support red as a color: not only should it be relatively easy from the NTSC standard (given how every raster is made up of Red/Green/Blue), but also since color on the /// was mostly driven through an RGB interface which I presume was digital and would have supported red (e.g. EGA should be close..?)

Any idea why red wouldn't have been supported?

I was playing around with an emulated Apple /// and while looking at the color demo I noticed that unlike the Apple ][,

Not really, as the Apple II also didn't do red, just orange.

Apple II colours were black, green, purple and white plus blue and orange when shifted (*1),

the /// did not implement red as one of its supported colors.

While in Apple II mode, the AIII supported the same resolutions and colours as the AII - and as the A2 doing so only with NTSC encoding.

I find it puzzling that a system wouldn't support red as a color: not only should it be relatively easy from the NTSC standard (given how every raster is made up of Red/Green/Blue),

Erm, you seem to be mixing up several independent issues here. NTSC is an encoding scheme to transport colour information as a single channel using a phase shift, while RGB is an encoding using three different, independent channels. NTSC in turn is not an RGB signal (*2). Further the use of three (or more) colour sections (and guns) in a colour CRT is neither related to a signaling scheme nor the way these colours are generated by the source.

but also since color on the /// was mostly driven through an RGB interface which I presume was digital and would have supported red (e.g. EGA should be close..?)

Again no. The Apple III doesn't use a 3 colour RGB scheme, its designers even went a step further and implemented a clean 4 bit digital interface. The video logic loads one nibble per pixel into the output buffer, where an external colour encoder can use this (in addition the the sync signal) to generate any picture.

What colours an Apple III screen shows is encoded within the monitor, not the computer

To get the 4 bit digital signal into an RGB signal an encoder may be built from a simple resistor network as shown in the Apple III Owners Guide: 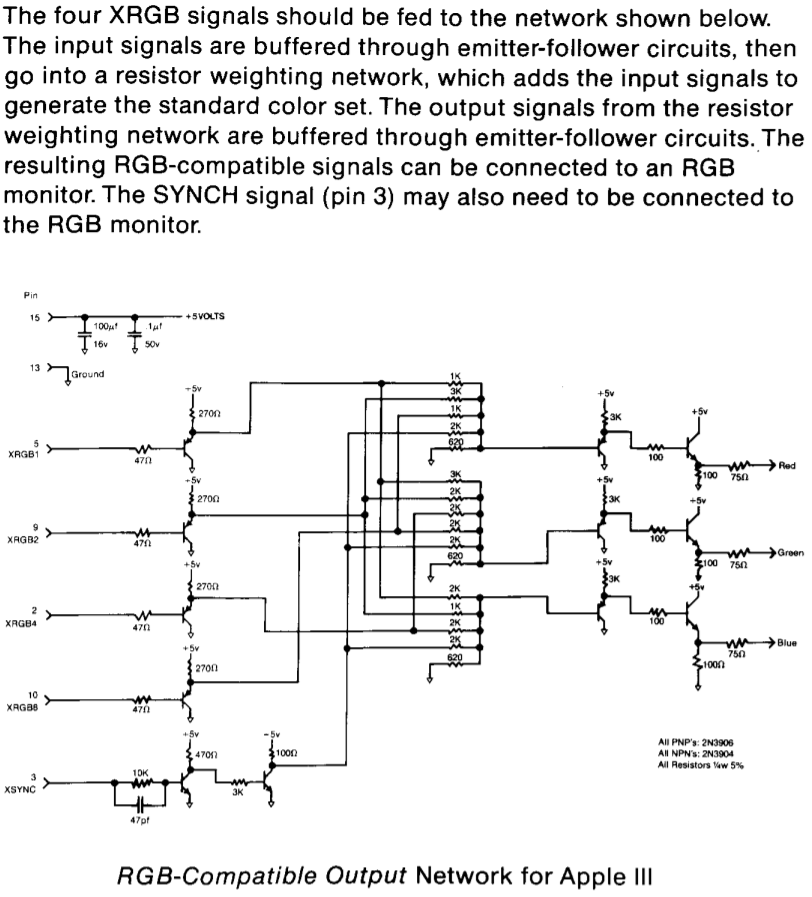 By using this encoder the colours should look much like the (BASIC) manual names them: 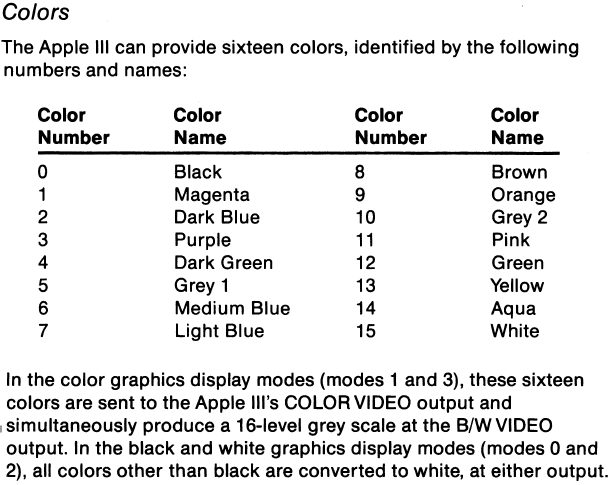 As with any system where the display interprets the data, alternate interpretations are possible - like this with the ability to tune colour levels - or one with just 4 resistors, that would producing eight different colours with two levels by simply using the lower 3 bits as colour and the top most as intensity. Now including a clear red ... or make up whatever table you like.

For the B&W output these 4 bits are added by a resistor array (*2) into a 16 level grey scale signal. Similar for NTSC, except here the colour comes from an A2 alike encoding where any 4 bit value unlike zero will produce the full intensity (*3).

Bottom line, in A2 mode it outputs an NTSC signal exactly like the A2, in A3 mode a 4 bit full digital signal is output and interpreted by the monitor ... much like with today's displays.

*1 - See this answer for a more detailed description.

*2 - And mixed with the sync signals as well.

*3 - Well, it's a bit more complex than that - or better it's simple, but rather complicated to explain. It all revolves of encoding the 4 bits into two NTSC 'clock' lines with by an 74LS153 mux controlled by the 7MHz colour signal and its 3.5MHz 'brother'. A look at the video encoding circuit may help.

40
What determines the color of every 8th pixel on the Apple II?
16
What is an XRGB video signal? (NOT the modern XRGB mini-DIN.)
8
Why did CGA RGBI output leave DAC to the monitor?

16
Ideal resolution for color computer on NTSC
10
Can artifact color mode create 262,144 colors on Amiga OCS?
20
Why BGR color order
18
Was Apple DOS 3.3 created because of the Apple III?
20
Why not one pixel per color clock?
5
Why not SCART for early color monitors
8
Why did CGA RGBI output leave DAC to the monitor?
11
Was it ever possible to access the full EGA color space in 200-line modes?
18
Why was the Apple III considered a failure (if indeed it was)?
9
What were the Apple II artifact colors?