I don't know whether it's still the case, but at least in the early days, it was common for RAM chips to be one bit wide, so e.g. an 8-bit computer would install them in groups of eight. I gather at least for DRAM, having sixteen kilobytes in the form of eight 16384x1 chips makes the refresh circuitry simpler than if it was eight 2048x8 chips.

I notice some chips were four bits wide. https://www.intel-vintage.info/intelmemory.htm lists specific models; there are plenty of chips, both static and dynamic, with a width of four bits, but only a handful eight bits.

This did have consequences; the Acorn Electron tried for 32K total with a minimum chip count to reduce cost, ended up with a 4-bit data bus, which basically halved its speed. Certainly at a time when the majority of computers had an 8-bit data bus, it would seem intuitively more logical for that to be the width.

So why was x4 so much more common than x8?

I don't know whether it's still the case, but at least in the early days, it was common for RAM chips to be one bit wide, so e.g. an 8-bit computer would install them in groups of eight.

Not really. It depends on the way the Family designers envisioned a certain system. And what the use case in terms of memory needed was. Early RAM chips where all static and organized as x1, x4 or x8. Intel's 1 KiBit Ram was available as 256x4 as 2101 or 1024x1 called 2102.

The 2101 was housed in a 22 pin package, while the 2102 only needed 16. Due to the smaller package these chips could be offered for less, and building systems was even cheaper due the lower pin count. On the backside, it takes 8 chips to get a byte. Applications that need only 256 bytes or less are better off to use nibble wide memories, as with the 2102 only two ships where to be soldered. And while each might be a few percent more expensive than its x1 counterpart, cutting the BOM down from 8 to 2 chips was quite a saving.

Motorola went even a step ahead and made its 1 KiBit chip 6810 byte-wide. Thus, embedded systems with a need of 128 bytes or less could be made with just a single 24 pin IC.

MOS went with the 6550 nibble wide - again to enable small systems at low price - the 6500 was meant to be as cheap as possible.

I notice some chips were four bits wide.

For a short time - and on static RAM - they became the majority, as they allowed to cut down on chips needed. Keep in mind, back then designers didn't just fill up the address space and see if it's needed or not. Also, nibble wide chips could be used in 4 bit as well as 12 bit systems. So it might be a sweet spot.

but only a handful eight bits.

Early on yes, but around 1980 8 bit wide static RAM became the standard. See 6116, 6264, 62256, etc. Much like with (EP)ROM static RAM didn't need multiplexing, thus 8 bit wide is the most simple cost effective design - as long as the memory need can be satisfied by one IC.

And before you ask, 4 bit wide DRAM were a special case. They where especially popular with 256 KiBit RAMs. When organized as 64 Ki by 4 two could be used to fill the whole address space of an 8 bit micro. So similar organization, but different reasoning.

In the case of Intel, their initial manufacturing lines were set up for 16 and 18-pin ceramic DIP packages. Thus, their first memory and processor chips were limited to 16 or 18 pin packages: 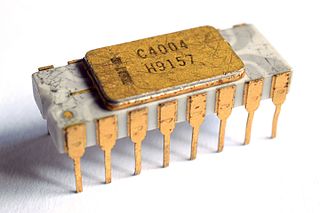 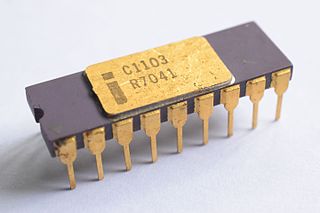 Intel determined the Busicom design was too complex, since serial memories required more components, and would use 40 pins, a packaging standard different from Intel's own 16-pin standard. Intel proposed to develop a new design which could be produced with standard 16-pin DIP packaging, and would have a reduced instruction set.

It took several years before Intel could afford to upgrade their production lines to larger package sizes.

When using a non-multiplexed address bus, an N-by-4 RAM chip will need two fewer address bits than a 4N-by-1 chip, so even though it has three more data bits, the net gain for moving to an N-by-four organization is only one pin. Expanding to an 8-wide arrangement could save one more address pin, but add four more data pins.

Not the answer you're looking for? Browse other questions tagged memory chip ram or ask your own question.

15
Speed of early ROM versus RAM chips
10
When did 64K RAM become about as cheap as 16K?
18
80s DRAM chips: one per bit of data bus width?
3
Were 64k RAM chips $5 in 1981?
13
Part-bad chips other than RAM
4
How wide were the RAM chips in the PlayStation 1?
7
Could any computers use 16k or 64k RAM chips?
5
Modern (cooler) replacements for vintage static RAM chips
24
When did half-bad RAM chips stop being available?
18
Did anyone ever put half a megabyte of memory in an Altair?