Why did Steve Jobs say that Darwin is a kernel? [closed]

Ask Question
Asked 2 years, 1 month ago
Active 11 months ago
Viewed 530 times
1
Closed. This question is off-topic. It is not currently accepting answers.

In this video, Steve Jobs introduces Mac OS X (in the year 2000), this is a snapshot from the video: 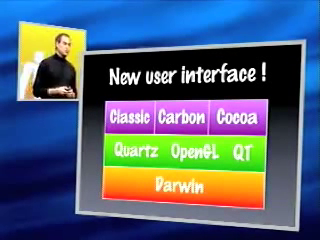 He says that Darwin is the kernel for Mac OS X.

Now the following is a diagram of the Mac OS X architecture (from Wikipedia): 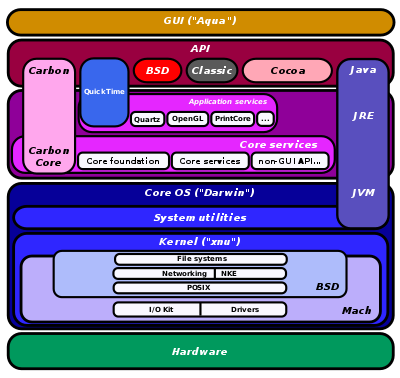 The diagram shows that the kernel for Mac OS X is XNU (not Darwin), and that Darwin is XNU plus system utilities.

Does the term "kernel" have many definitions?

The answer is simple, Jobs was simplifying for the media.

Does the term "kernel" have many definitions?

I guess that's the core (SCNR) issue here. Kernel is a quite vague definition. It's even visible in aboves picture as Mach itself is defined as a kernel, and everything above (like file systems) services that are added later. Then again, above graphics tie the Mach kernel with services (from the BSD project/kernel) and call the result ('xnu') again a kernel.

So when more utilities get added and bundled as 'Darwin' it is an arbitary coice to call it OS or kernel. In fact, the term 'core OS' coined here (whatever that should mean) sounds much like an attempt to avoid writing again'kernel'.

Bottom line: What 'Kernel' means is an arbitrary decision for a vague concept.

It is one of these 'I know it when I see it' kind of words, concept words, that are great for a generalized abstract discussion, but do not work for an in detail description.

So for a concrete product, it's whatever parts the manufacturer calls so. And Jobs as CEO does hold some stake here, doesn't he?

(And as John Dallman already mentioned a term for simplification and marketing, bendable as needed, to sell the product with some techno babel aura)

Not the answer you're looking for? Browse other questions tagged history apple-macintosh operating-system terminology or ask your own question.

24
Why do all the Speech Synthesizers have that same Voice?
8
Why did some Mac computers have two names?
5
Tools for creating disk images on Mac Plus
16
Why did 3.5" floppies win (and not another size)?
3
When and why would MacinTalk say “open-apple hold”?
5
Was Steve Jobs really Atari employee number 40?
1
Why was the SWTPC 6800 Computer System cheaper than the Altair?
4
How was EDSAC program code represented on uniselectors?
6
Macintosh Plus always resets on power up