How do I Interface a PS/2 Keyboard without Modern Techniques?

I'm attempting to build a Z80 homebrew computer to teach myself the basis of electronic design. I planned to start from something simple, like a ROM, some SRAM, a video chip and a Z80-PIO. I'd like to build a machine with straightforward I/O, that it, the design requirement: one should be able to use the computer by simply plugging a PS/2 keyboard, rather than hooking it to a RS232, USB-TTL stick or some exotic CRT terminal.

But how to incorporate a PS/2 keyboard input to my computer is unclear to me. According to my research, this problem has been solved by the following approaches.

Currently, I'm considering to interface the PS/2 keyboard by implementing the 8042 keyboard controller on a 8051 MCU if there's a free reference implementation available, if not, I think it should be okay for me to implement something simpler, too.

But I think programming for two separate chips makes my project more difficult, especially for the initial prototype. I must have missed something... I knew most keyboards from that era were parallel ones, not PS/2, but there must be some additional and possibly simpler methods to interface a PS/2 keyboard, are there? How was it being done historically?

I'm attempting to build a Z80 homebrew computer to teach myself the basis of electronic design. I planned to start from something simple, like a ROM, some SRAM, a video chip and a Z80-PIO.

So there's a Z80-PIO? Isn't that already the solution to be used?

Not to mention, that adding another micro controller for a job the main CPU can do as well is neither simple nor true to the spirit of early systems. I mean, adding another whole computer system, even of greater performance than the main system, just for a keyboard interface?

A Z80 with a PIO can do everything (*1) a separate system can do. In this case it needs 4 port bits. Two for receiving data/clock from the keyboard/mouse, two to overwrite these to initiate an output sequence and control output data. Externally two drivers for the input signal, two resistors and two transistors, as shown, may be helpful.

It may be helpful if the clock input pin can be set to interrupt the CPU so a response to a key press can be handled without polling, but it'll work as well by pulling clock low and only releasing it when ready to receive a byte (*2).

Everything after that is simply bit-banging the protocol. The CPU got 5 microseconds per bit to react, which can be done on a tight looped 4 MHz Z80. Of course it will need some fine tuning, but isn't that exactly the goal of your project?

USART. [...] However, PS/2 is clocked by the keyboard and its frequency lies at anywhere between 10.0–16.7 kHz, again, this method is NOT in compliance of the protocol at all, and could only work by chance, so it's more of a clever trick than a proper solution

Of course it is a proper solution - all that's needed is to clock the USART externally. Important here: the Z80 SIO is well fitted to do the required 8E1 data format. Neither a hack nor anything clever is needed - maybe except to detect the acknowledge bit on host to kbd transfers.

How was it being done historically?

This depends a lot on the machine we're talking about.

Parallel keyboards where somewhat common, when it came to ready made units to be added as component. These where either

Serial was (in the beginning) even more common, usually when keyboards had to be complete OEM units just to be plugged in (DEC, Apple Lisa).

*1 - Well, next to that is, as separate controllers may be faster in some special cases - except, PS/2 is none of them.

*2 - Yes, very easy and a protocol conform way. Drawback here is that each poll will have to wait at least for 100 (better 200) microseconds after releasing the clock line to check if the keyboard wants to send at all. So not really cool.

Just use Z84C40 SIO chip. It's a part of standard Z80 family chips and has two channels. I used it for PS/2 keyboard and USB connection to my breadboard Z80 computer running at 2.4576 MHz. Z84C40 can divide system clock by factor of 16, 32 or 64 thus I run my UART-USB bridge at 38,400 baud without use of 4-bit counter as system clock divider. Luckily PS/2 keyboards generate clock themselves. So all you need to connect a keyboard is this chip and PS/2 connector (female). 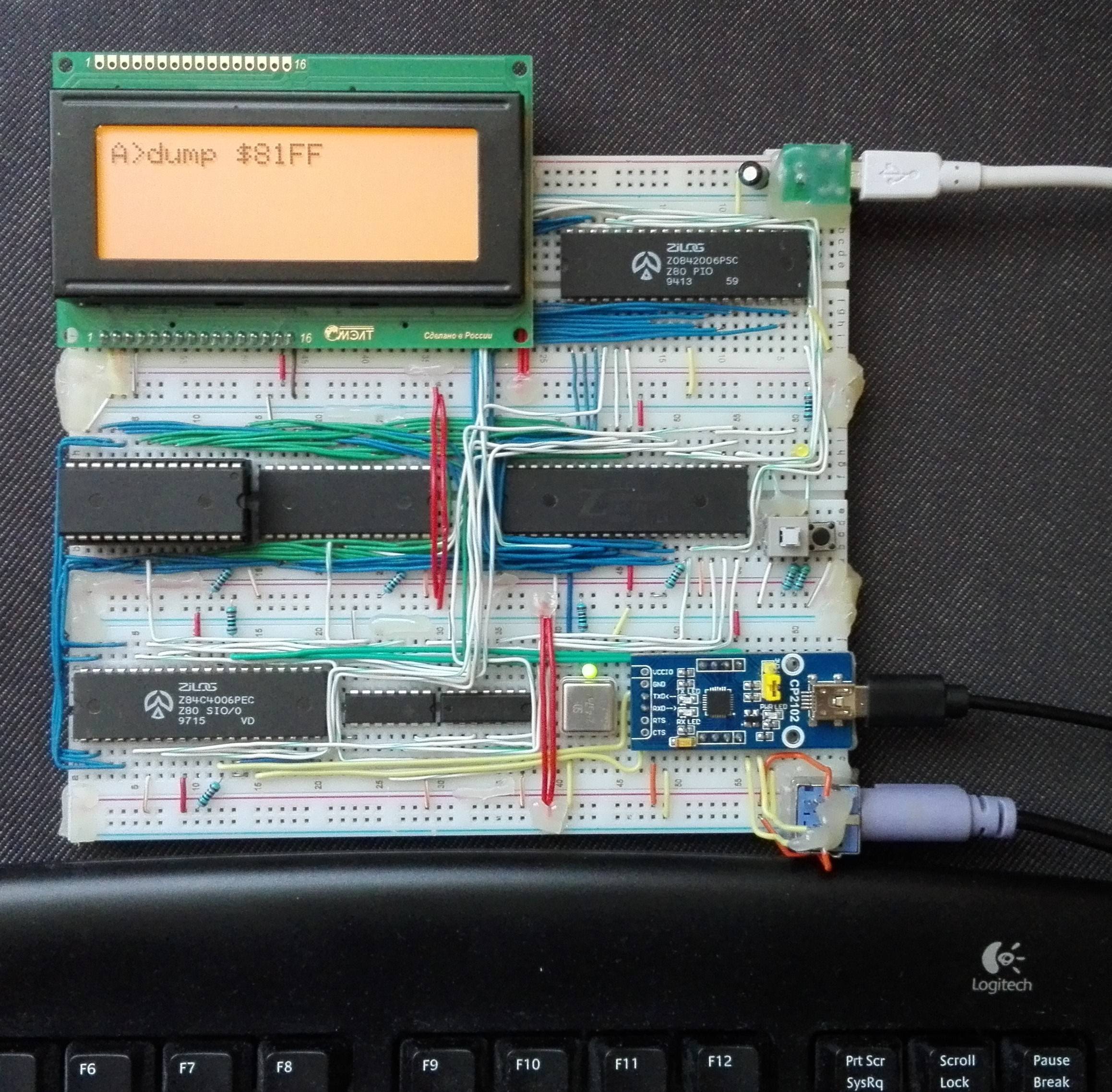 Update: I have finally made adapter PCB for 2.8" TFT Arduino UNO shield which provides back compatibility with previous LCD screen (no need to rearrange connection wires). Also I've made a convenient EEPROM programmer shield for Arduino MEGA. So now I have a lot of fun coding my Z80 breadboard machine which now runs at 10 MHz. Also there is 7.3728 MHz clock generator for UART-USB bridge (115,200 baud). 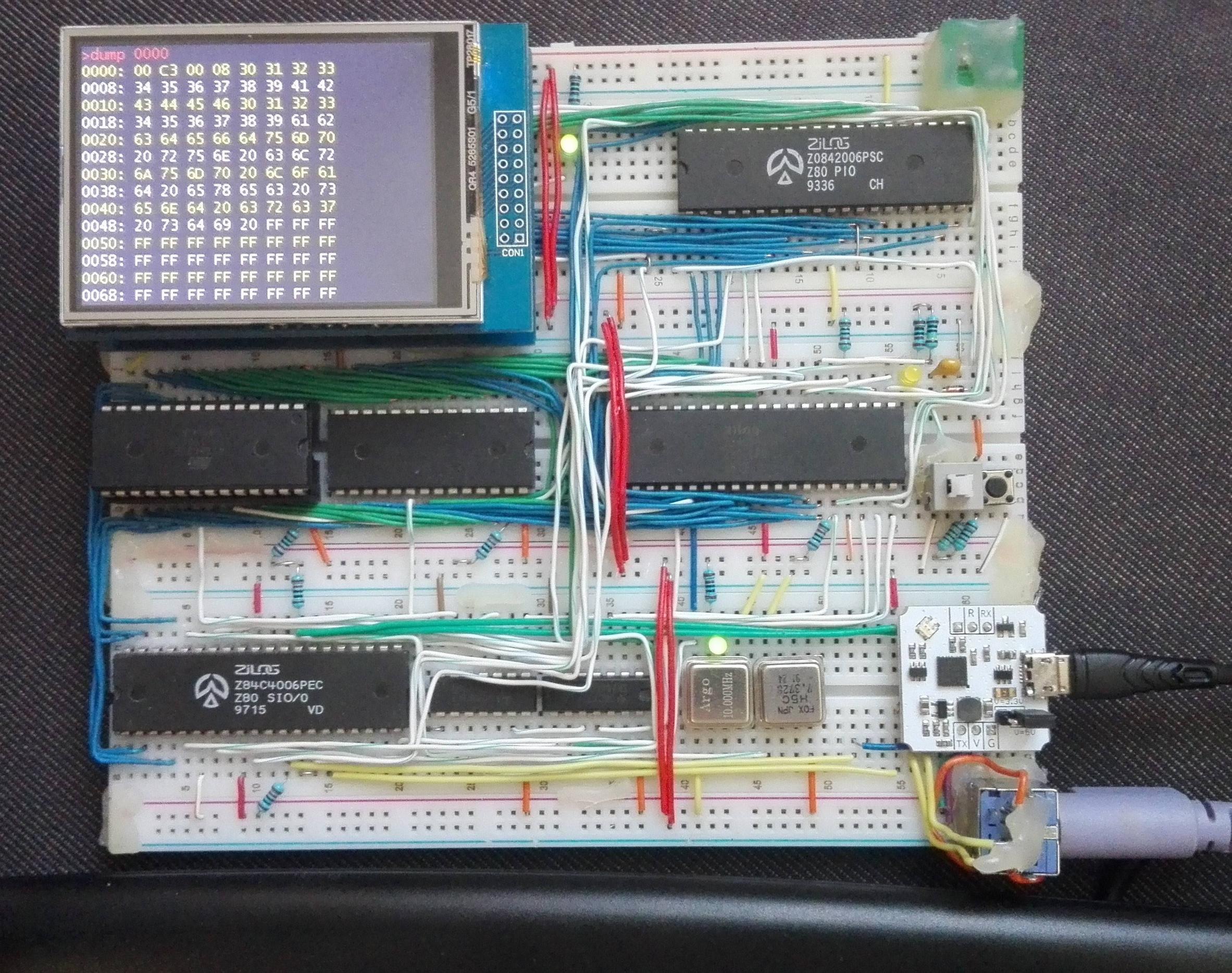 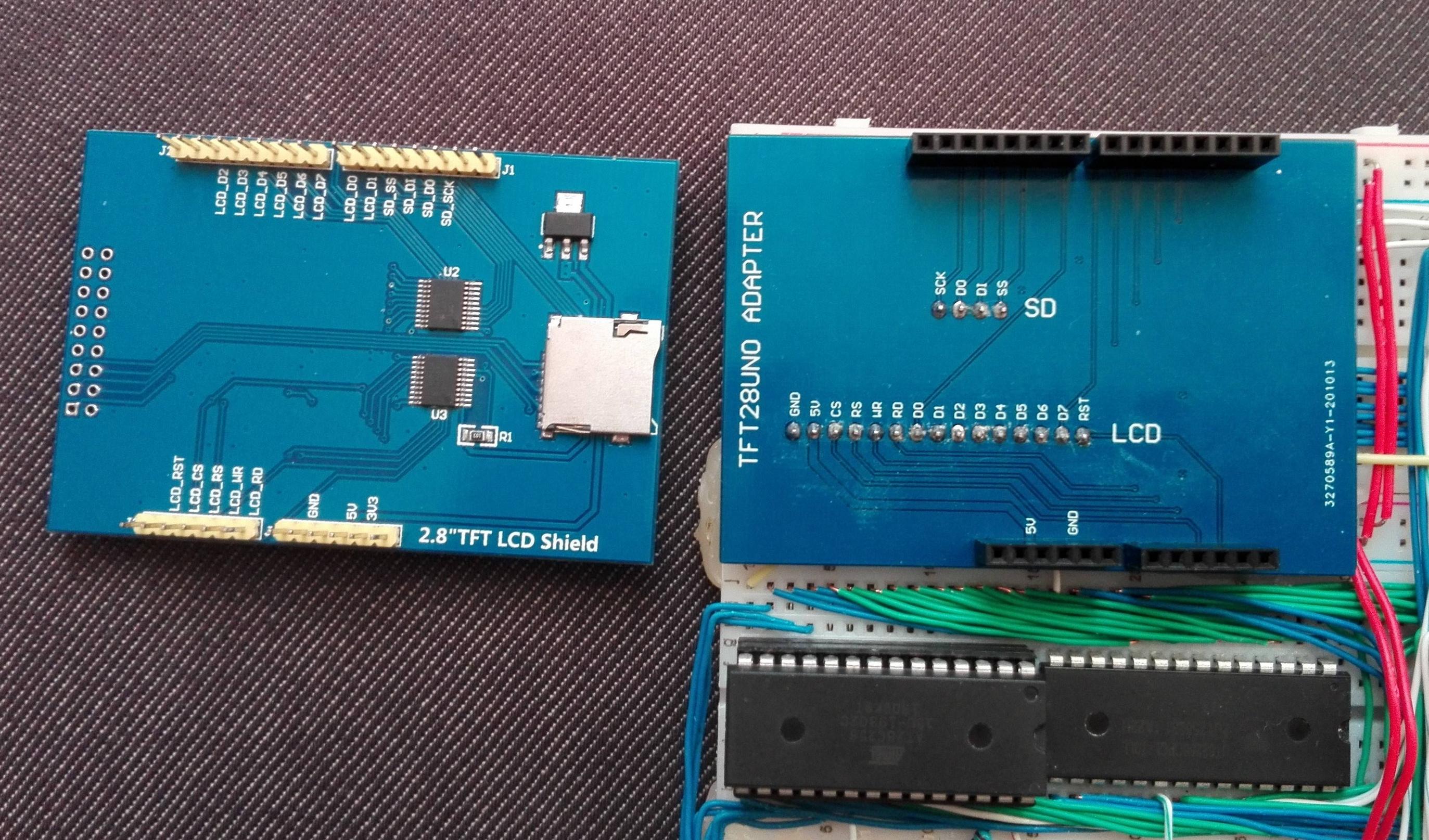 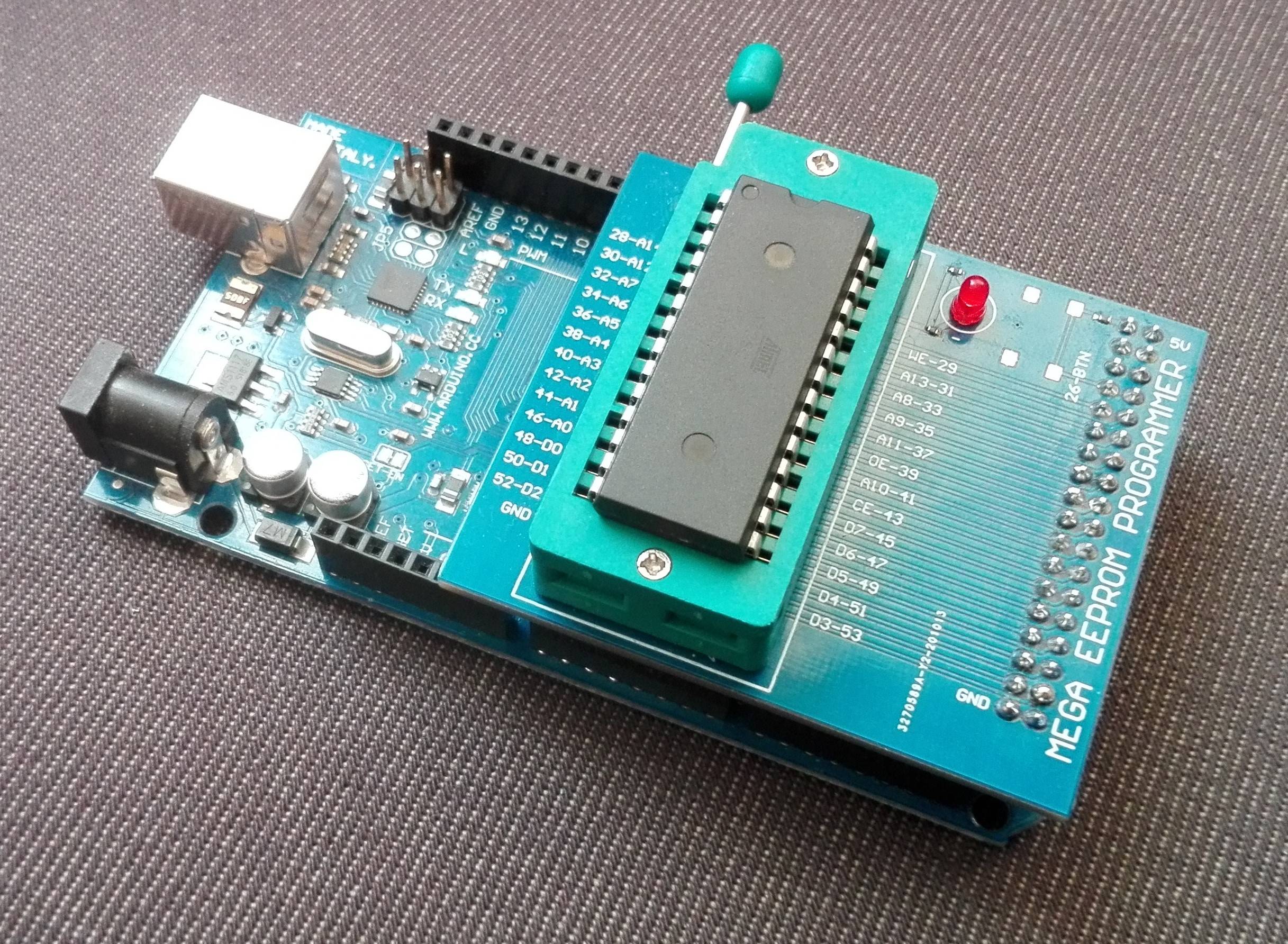 PS/2 is a SPI protocol. Talking to stuff like your keyboard is literally what SPI peripherals are designed for.

So the most obvious choice, if your micro has a SPI peripheral, is to use it. If you think that sounds too easy, wait until you start looking at the registers to set it up. It can be a lot harder than you think, if you're not used to following specs to the absolute letter!

But let's suppose you want to do it the hard way. Then you're looking at shift registers and some logic, which is how the peripheral works anyway. It's not just the parity bit you need to check. For a valid frame, there must be start and stop bits too. Two 8-bit shift registers are fine - just ignore the lower bits.

You could interrupt on a keyboard clock edge, read in both shift registers, and work out whether the top 11 bits form a valid message. That's cheap on components, but puts more load on the processor. At 16kHz, it's probably not too bad though.

Or you can decode in hardware - basically build yourself a small version of the SPI peripheral you've got in your micro. You can do this in stages of increasing complexity.

The neat thing now is that you can get back to only using an 8-bit shift register, by only enabling the shift register clock when the counter is between 1 and 9. Other bits won't come through.

And now you have a working SPI receiver.

A naive version might disable this detection whilst the counter is non-zero. After all, we know we've got a frame start, right? The correct version keeps it running though, because what happens if you lose the connection mid-frame and then get it back again? So if you get an extended low clock pulse at any time, it will reset the counter back to 1 to pick up the new frame, and just overwrite anything currently in the shift registers.

I'm not going to get onto the Tx side, because that's a whole nother world of pain. Left as an exercise for the reader, as they say. :)

If you really want to do it the shift-register way, there are 9 bit shift registers available. If you do a search at digi-key for '9 bit shift register', then sort the resulting table by number of logic elements, you can see a few varieties on that theme.

If you want a "pure TTL solution", maybe an evolution of this project can help you:

Not the answer you're looking for? Browse other questions tagged z80 input-devices or ask your own question.

8
What was the first commercially available computer with ECC memory?
4
Z80 PIO Keyboard

25
Z8410 DMA chip as GPU?
6
Which Z80 opcodes can I use without a stack?
22
Why does the Z80 include the RLD and RRD instructions?
10
What Video Chips/Video generation techniques are usable for the Z80?
19
How did integer multiplication work in 8-bit BASIC without CPU support
7
Floating control during bus sharing
3
Z80: Interrupt (IM2) daisy chain for "foreign" peripherals
7
Did the keyboard "scancodes" available to Commodore PET software differ between models?