I have installed two gotek device instead of two old unworking floppy disk drives (in particular on an Olivetti PCS 86). 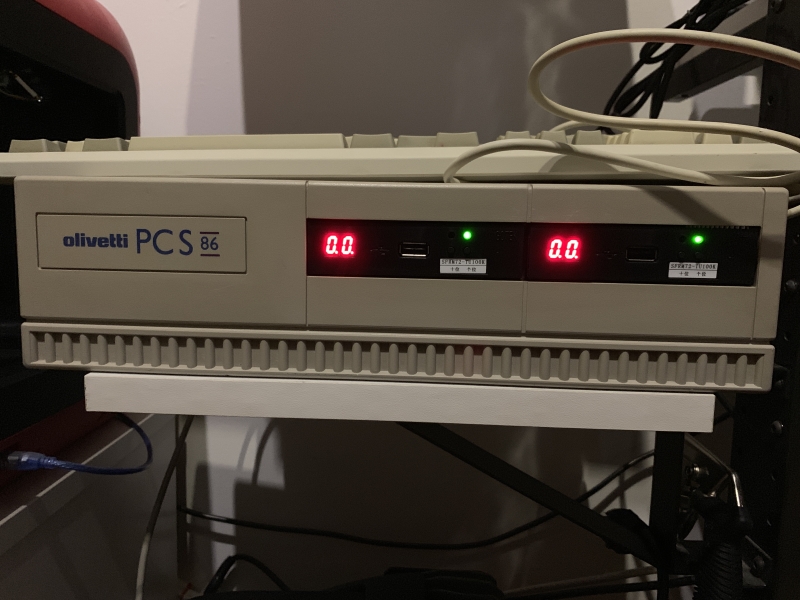 (The one on the right should the the A: and the left one the B: as the connector end is at the right.)

Once switching on it can not detect the presence of the new floppy units. 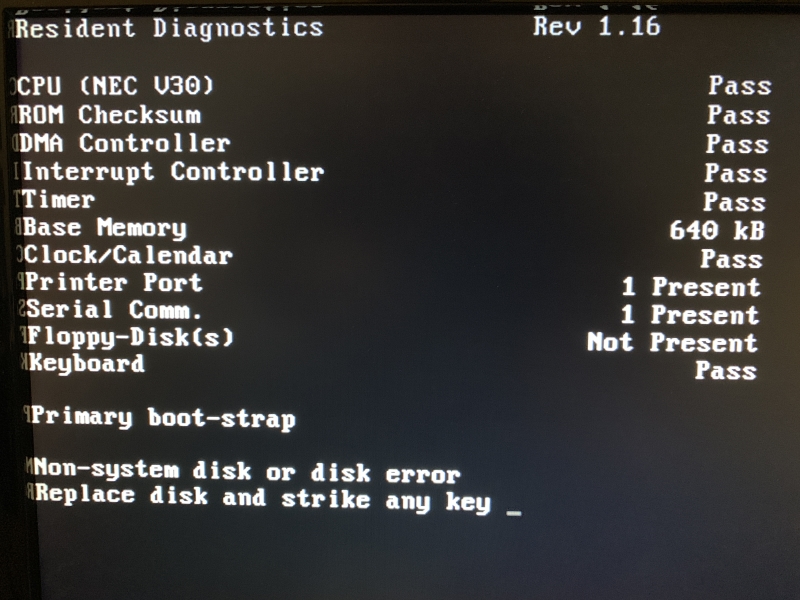 Unfortunately, I can't find any information about Gotek jumpers configuration for MS-DOS. In addition, the machine seems to support only double-sided 720Kb floppies.

The Gotek(s) should already have the correct firmware because the drives were named "SFRM72-TU100K USB Floppy Drive Emulator 720KB for Industrial Automation" on ebay (from where I brought): so, luckily I need to take care only of the jumpers configuration. 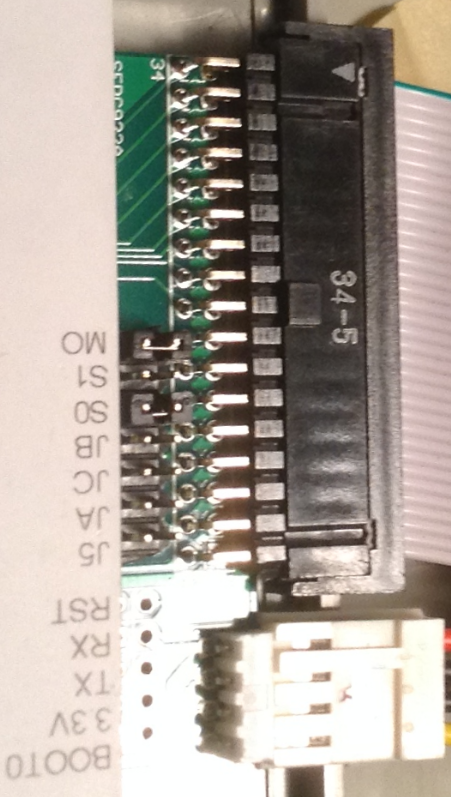 Is it possible? Do I need to take care also of this factor for the jumpers configuration?

Firstly, a little bit of background information. The Gotek is designed to work with a wide number of computers, not just IBM-compatibles.

The original standard for floppy drives (designed by Shugart) allowed for up to four floppy drives to be connected to one controller. The controller would indicate which drive it wanted to communicate with by activating a Drive Select signal on one of four wires (typically labelled DS* or S*), then activate the Motor On signal to spin up the drive. When installing a floppy drive, you would be expected to set the jumpers correctly for the intended drive number, and several other parameters.

IBM-compatibles use the same floppy dries, but in a slightly non-standard way. It only supports two drives, and has separate motor control for each drive. (See this page for a description of the pinout for Shugart and IBM cables.)

What IBM cleverly did was get rid of the need to set jumpers on the drives by swapping some of the wires in the floppy drive cable instead. All drives for IBM-compatible systems are shipped from the factory jumpered as drive 1 (B:), but a twist in the cable swaps wires 10 to 16 (seven wires) around for one drive, which swaps the Drive Select and Motor Enable signals. The net result of this is that the drive you plug in after the twist will respond to DS0 signals (as drive A:) and the drive before the twist will respond to the DS1 signals (as drive B:).

Assuming you have an IBM-style floppy cable, with wires 10-16 twisted, you will want to set both drives to S1. You will also need to configure the Olivetti's BIOS to expect two 720k floppy drives connected.

The MO jumper is likely controlling how the Gotek responds to the Motor Enable signal. The JA, JB, JC, and J5 jumpers are probably Gotek-specific settings.

You will also need to make sure that the floppy drive cable is plugged in the right way around: the coloured stripe along the cable usually indicates the location of pin 1, but in the picture you've uploaded the stripe is next to pin 34 of the Gotek (as labelled on the PCB). A genuine floppy drive will spin constantly with it's LED lit when you fit the cable upside-down, and the computer will fail to communicate with it. I would expect similar behaviour from a Gotek.

I'd suggest moving the jumper from S0 to S1 - IBM compatibles expect drives to respond as Unit 1, not Unit 0.

Thanks for all the support! I resolved in the following way, hoping this could help someone else with the same doubts in the future. 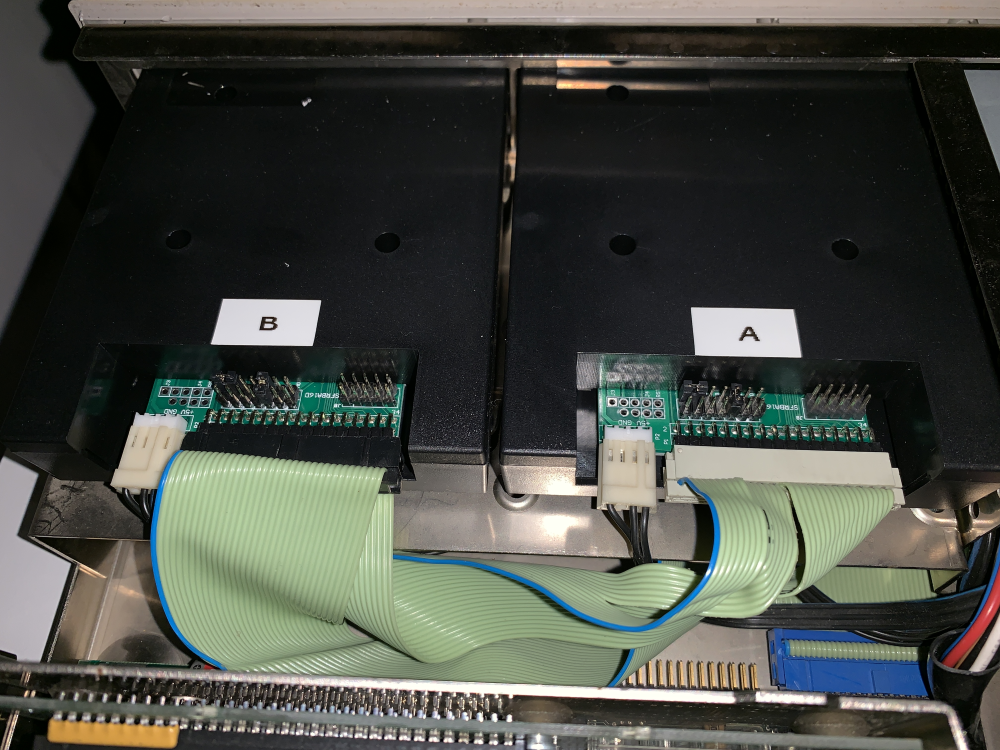 14
How to build a workstation to handle bulk quantities of floppy disks?
18
Is it possible to adapt a standard PC floppy drive to work in an IBM PS/2?
19
Formatting a 720K floppy disk over USB fails with Windows 10
6
Which DOS for a TRS-80 Model 4P?
5
Old SCSI controller won't boot on certain PC
2
What are the differences between the various HxC Floppy Emulator hardware options when used with an Apple II?
12
What physical size and density floppies are the intermediate-capacity options for the /F switch of the DOS/Windows/OS/2 FORMAT command meant for?
2
"Restoring" a 1986 Compaq Portable II (Cabling question)
1
How to write Apple IIgs .po disk images to Floppy Disks with an older Mac