Were there computers whose text touched( or came close to ) the overscan border? [closed]

QUESTION -
. Were there computers whose text in text-mode, touched( or came close to ) the overscan border, and could this sometimes result in some of the computer-generated-display not being visible on some tv's / monitors? ?

Time range - Approximately 1975 - 1985, although any earlier examples are also interesting .

In late 70's and early eighties, on some tv's, you strongly felt as if you were not seeing all of the picture being transmitted, due to
1 - Curved corners of the screen ( variation on different tv's )
2 - Different screen sizes or ratios
3 - Or, because adjustment controls seemed to result in losing horizontal picture to gain vertical picture, or, vice versa.

Note - I don't know how curved corners worked on tv's or monitors, if or not tv-camera-sensors had curved corners, and if any computers had them in their video-memory ( I'm sure they did not ) .

Note - I'm thinking if the following thread -
Was the picture area of a CRT a parallelogram (instead of a true rectangle)?
was not deemed irrelevant, then neither should this one .

UPDATE
- All excellent answers etc, although I'm surprised no one has mentioned earlier computers ( maybe they were only kits ) from lets say 75-79 ( or earlier ! ), which seemed to display things right to the top or bottom edges of the screen, a display that looked like the famlous tv-typewriter .

UPDATE - I have now updated this question, even though the answers already received cleared up a lot of what I was curious about .

1985 means we can include the Commodore Amiga, which was designed to display images beyond the visible screen area. Along with its genlocking capability, this feature made the Amiga attractive for video production.

The Amiga's standard Workbench resolution of 640x200 (NTSC) or 640x256 (PAL) just fitted inside the visible area of most TVs, but applications could open 'custom' screens which were wider and/or taller. A screen could also be pulled down to reveal other screens 'behind' it, and then the bottom of the 'front' screen would move down into the overscan area. Workbench included a 'Preferences' tool for centering screens on the user's TV or monitor. Later versions of AmigaOS also allowed the user to adjust the Workbench screen size to suit their tastes.

The photo below shows the 'high resolution' 640x256 pixel 4 color Workbench screen pulled down to reveal a paint program running in its own 'low resolution' 352x266 pixel 32 color 'custom' screen. The paint program's toolbar is partially hidden behind the tube fascia, so half the tool icons are invisible! 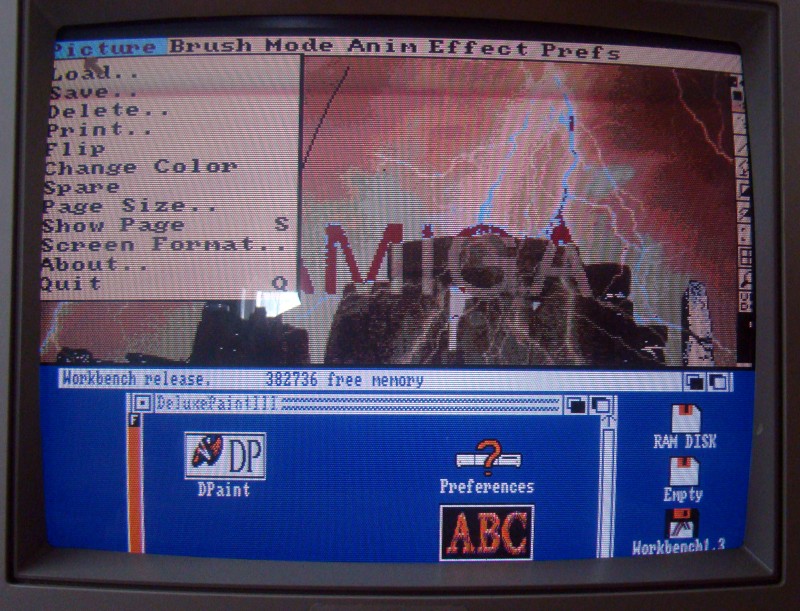 Before computers, television broadcasts defined a "title safe" (or "safe title") area which was a rectangular region in the center of the video signal that any properly maintained television was guaranteed to display. Any words on the screen (titles) should fit within this area which occupies the center 80% of the screen, giving a 10% border all around.

You asked whether there were any "computers that did not limit their display to a box centered in the middle of the screen". I think you are referring to the title safe area, and the answer is yes. The Commodore 64 and other computers could set the color of the border outside of the title safe area and could display sprites in this area. The NES went a step further by displaying a 256×240 pixel picture that covered the whole action safe area, and within that the center 224×192 pixels were considered to be title safe."

Computers used for full screen video production such as the Commodore Amiga (1985) also needed to be able to write to the entire action safe area. See Bruce Abbott's answer for more information.

In place of analog electron guns that had to be adjusted to keep the picture centered and sized correctly, today's digital displays have hardware pixels that go right up to the viewable edge of the screen and so the entire video signal is both action safe and title safe.

A generated video signal will always be within the limits on the appropriate screen. If not, it will be due a misaligned (*1) display - or using a non fitting display, which is the same.

Keep in mind, especially when including monitors (that is devices not tied to any TV standard), there are no limits other than the ones set by its manufacturer. Any combination of line length, lines per frame and frames per second is possible. There is no right or wrong.

Common for all of these, the (composite) video signal for each line follows the same definition of Front Porch, Sync, Back Porch and Display Area as this nice picture shows:

The Display Area is the part of the signal that is meant for display. It is fixed within the appropriate production line. For US TV production (60 Hz 525 lines) it's 52.6 µs, for European 50Hz/625 lines it's 52 µs. Anything longer will result in an invalid picture, everything shorter needs to be filled up (*2).

Early (hobby) machines often used the whole display area, leading to a picture creeping deep into the edges (*3) Later (home-) computers used in most cases only a section of the display area due various reasons (*4). The remainder was usually filled with their background colour (like white on a ZX81) or even offered to select a certain colour/brightness (think VC20).

Computers always outputed the whole area. It was up to the user to adjust the TV set in a way to emphase on the variable content or not.

Later the ability to cover the whole display area with more than just a border was sold as a 'new/additional' feature - more of a marketing move ignoring the past than anything really new.

So in any case, the display area of a composite signal is always the same and intended to be fully displayed. What part of the signal is finally shown is not determinated by the computer or it's video hardware, thus it can't be influenced by either. it's strictly an issue of (faulty) display setup.

Bottom line: The question is not about computing but display properties and a faulty setup thereof.

Note: The issue of Title Safe and Action Safe area are sometimes mentioned in this context (likewise Overscan, Underscan or Fullscan). Except, they are neither part of any of TV/CRT technology or relevant for a correct adjusted display. They are purely hints for TV producers where to place which content, to increase the chance that a transmission gets show even on malaligned TV sets. There is no guarantee for either to be helpful or to matter at all. For a computer setup a correct adjusted screen is default (and mandatory).

*1 - Or on purpose aligned that way. So if you see pictures using the screen way into the edge, it's because the user has adjusted the screen to show it that way, not because the computer did so.

*2 - By default in black, but any other intensity/colour is valid as well.

*3 - Noteworthy the TV dazzler with producing the whole display area from memory data - a fact that made it quite useful and a defacto standard in late 1970s early 1980s TV production.

*4 - Beside the intention to produce a certain pixel ratio, more often than not it was the same as with TV: staying within an area even quite old TV and/or less than perfect aligned TV will show without the need to be adjusted. It's all about user experience, isn't it? And having to adjust the TV set is no considered a perfect one - no matter how habdly adjusted it already is.

15
Was the picture area of a CRT a parallelogram (instead of a true rectangle)?
11
Visible resolution of C64 video output, including borders

26
Which computers had redefinable character sets?
24
Were there any LSI-11 like home computers outside of Russia?
46
Why were chips socketed in early computers?
0
The earliest a home-computer or home-robot could be interfaced with a commercially available camera?
20
Did arcade monitors have same pixel aspect ratio as TV sets?
8
First computer to have interactive text on a CRT?