How much RAM did the first version of Oregon Trail on the Apple II require?

The later iterations of the series could have hundreds of kilobytes of RAM, but the original Apple II had 4K in the minimum configuration and 48K maximum (the latter using 16kbit chips which were still expensive in 1977).

Oregon Trail was one of the best-known games ever released for the machine; it has been said that nearly everyone who darkened the door of an American school during the heyday of the Apple II, played that game at least once.

There have been many subsequent versions of it (as well as previous versions on other platforms), but how much RAM did the first version of Oregon Trail on the Apple II require? 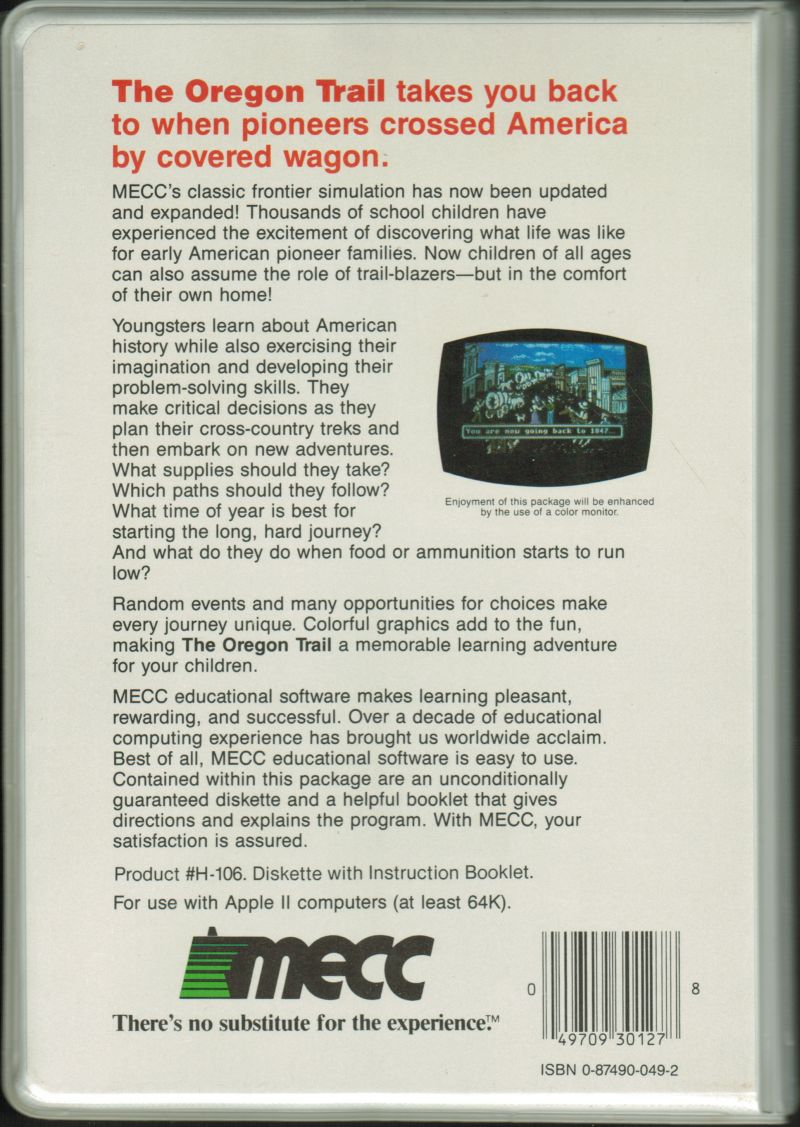 Back cover image from MobyGames.

The Apple II version came out in 1985 so 64K of RAM wasn't as a big of a requirement as it might sound. There were earlier text only versions of Oregon Trial, but it was this graphical version that most people would've played as students. While "thousands of school children" may have played the earlier text versions, it's this graphical edition that "nearly everyone who darkened the door of an American school during the heyday of the Apple II" played.

Not the answer you're looking for? Browse other questions tagged history apple-ii memory gaming or ask your own question.

16
How can I programmatically tell which version of Apple II my code is on?
18
Quick way to tell how much RAM an Apple IIe has
13
How much did the 6502 and Z80 cost?
12
Did the PAL version of the Apple II use a different clock frequency?
4
How does the Apple II address more than 128KB of RAM?
9
Why wasn't the Z6 version of the Infocom Z-machine ported to the IIgs?
10
Small RAM 4 KB on the early Apple II?
4
How did “RAM” cartridges for the C64 work?
2
How much did it cost to develop the Z80 CPU?
7
In an Apple IIc, how is memory beyond 128K addressed?