Why don't manufacturers make handheld computers like the Jornada 720 any more? [closed]

One of my favorite PCs in old times were HP Jornada handheld pcs (680, 720) - perfect match of usable hardware keyboard, large-enough screen, protected by keyboard when closed, and usable OS designed for doing tasks and not only multimedia/calls/browsing. All this perfectness was in case, small enough to fit inside pocket (ok, rather big pocket) and was able to work 4-5 hours (psions much longer and from generic AA batteries)

This market was rather large - HP, LG, Psion, Philips and many more, but somewhere near y2k they all just ... gone. Yep there were some efforts from Nokia with E90 but it was "even not as good as 9500" with s60 Symbian designed for different tasks.

I understand that some part of this market moved to qwerty phones, which actually disappeared couple years later. Some part moved to tablets and "business-oriented" phones. Sony made some attempts with it's sub-notebook series but they were too slow with first generations of inlet atom cpus (really, i was surprised that windows 7 took about 5 minutes to start on fresh pc). All modern stores are full of different types of ultrabooks, they all are thin but they all can't fit in a pocket because of large screen.

Nowadays it is so easy to adapt a power-efficient cpu like ARM A53 or something from entry x86 Intels into a HPC-size form-factor with good old proven qwerty keyboard - so why is nobody making one? I mean not entertainment device, but a "smaller than sub-notebook" workhorse 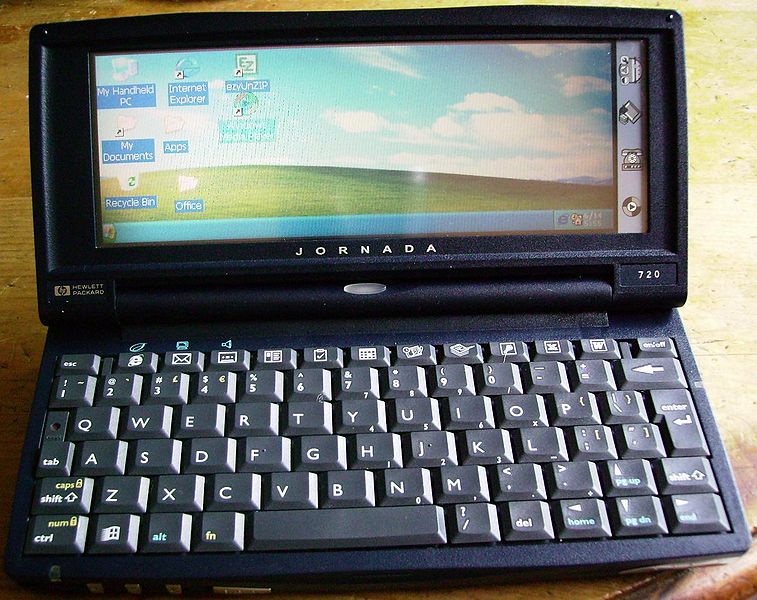 This answer is not quite about retrocomputing, but anyway...

They are making them, though it is a bit of a niche market.

One of the newer ones (designed by the original Psion designer!) is the Gemini PDA, running Android (and some rudimentary Linux support), trying to spiritually continue the Psion experience (at least from their PR standpoint), and the new offspring Cosmo Communicator, enhancing the "mobile phone" aspect (since the Gemini falls into the dark spot, it is too limited as a subnotebook and too bulky and clumsy as a mobile phone).

Then there are conceptually miniaturized notebooks by GPD, such as GPD Win (mostly for gaming), universal GPD Pocket, or upcoming GPD MicroPC, or the two-in-one almost-clone One Mix Yoga.

And then there are devices following the Alphasmart tradition, such as Freewrite Traveller (bulky; conceptually a smart typewriter, not a computer).

Also note that while subnotebooks were rare in Europe (and USA) and almost disappeared, in Japan they were quite successful and more widespread.

On the issue of qwerty keyboards on handhelds, I sympathise with you entirely (as the owner of a Nokia N900 and a Blackberry KeyOne).

Looking at a modern smartphone as the nearest equivalent of a handheld PC, a physical keyboard competes with the screen for space on the front of the device. If one generalises that most people consume more media on their smartphone than they create (and specifically create with a keyboard), then perhaps a larger screen is perceived as being more useful. A larger screen is certainly one of the selling points marketed by phone manufacturers in the last decade. The associated trend towards thinner and lighter devices also biases against having a clamshell device like the Jornada 720: it will be thinker, and look bulky compared to candy-bar or slate-shaped devices.

Back in the heyday of HPCs, they were comparatively expensive, and marketed mainly at professional and technical people. It's a similar market to the one BlackBerry aims for; note that they're the main manufacturer of smartphones with physical keyboards. But a physical keyboard doesn't appear to be a key selling point for the (much broader) smartphone market as a whole.

There may be some light on the horizon: the advent of foldable displays like Samsung's Galaxy Fold may make manufacturers look again at the clamshell format. Perhaps a manufacturer may think it worth their time to put a large, foldable screen on one side, and put a smaller screen and a keyboard on the other side. Who knows?

Not the answer you're looking for? Browse other questions tagged hp case handheld or ask your own question.