How advanced was the Amiga Walker prototype?

The Amiga Walker was a prototype Amiga computer that never made it to market. Wikipedia has some info including a photo of a motherboard.

How advanced was the prototype? Could it boot and run Amiga software, for example? Are the custom chips existing versions from older Amigas, or new revisions that would necessarily be engineering samples? Were any parts missing or non-functional?

I'm asking how close it is to being a completed product that could have been put into production, or even manufactured today were the CAD files made available.

Some additional information found here, note that the prototype apparently had performance below that of a basic A1200 due to some issues with it.

How advanced was the prototype?

At that time, Intel was already selling Pentium 166 (not MMX; MMX models appeared one year later), so ... not very advanced in terms of performance with its Motorola 68030.

If you mean completeness of this prototype, here is a review that says that:

Sort of. When powered up it seems to go into a boot cycle which it cannot complete and either stops or just keeps rebooting. It can be made to get beyond this stage complete with a partial Workbench load, but it halts on the error "Not a DOS disk in SDH0". Eventually, with patience, it can eventually be made to boot.

This Walker was seen working in late 2002 at the Aachen Amiga show after the "Coyte Flux" brothers managed to get it to work.

So yep, it was able to work; not as well as you'd hope when buying a new PC in the store, but able :-)

One more link with screenshots.

You may just want to read the Wiki article you linked, as right the very first reference (*1) it links to Nicholas Blachford's page about his Walker prototype (the vacuumer), including information about it working including this screen shot (taken from that page): 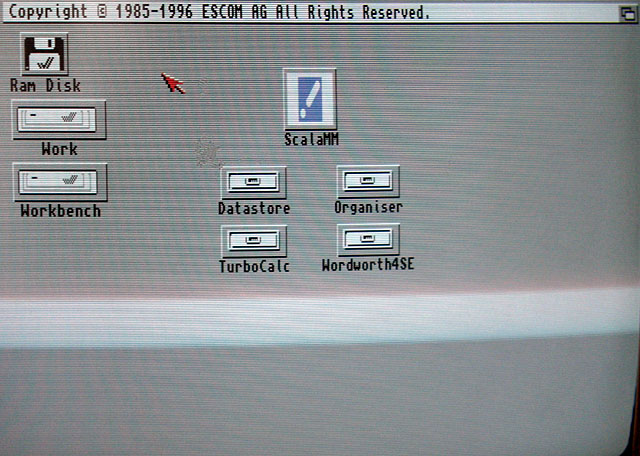 The Site also includes two more pages (Walker Working and Walker Working More) with images of running application and a description that it boots fine any classic system from Floppy.

*1 - Don't miss to ckeck the other references - that's why they are included anyway.

20
How was 8-channel audio achieved on Amiga?
20
How are Amiga libraries structured?
35
How did the Amiga DCTV work
25
What exactly was the Amiga Ranger?
12
How does the Amiga chipset RGA bus work?
24
Why was it not possible to cost-reduce the Amiga 500?
7
What was an Amiga "X-Drive"?
35
Was the Amiga ever used by any U.S. Government agency?