How were Zuse Z22 Instructions Encoded?

The title says it all:

(History and Linkage:
The question was raised by Wilson in a comment on my answer to his question "Why are PDP-7-style microprogrammed instructions out of vogue?", where I mentioned the Z22 as an early example for discrete function encoding and (V)LIW. I felt that answering this would better fit a question in its own right.)

[Preface: this is about a very early architecture, defined way before and completely independently of today's canon, formed by IBM's /360. When reading, it might be useful to take terms used at their face value, and strip all the semantic baggage that goes with them when talking about today's architectures.]

The Zuse Z22 is in many ways unique (*1), not just by being one of the first, if not the first machine to use core memory, but also in employing techniques that have been rediscovered decades later as 'RISCy' (*2). A related feature is skipping the 'classic' decoding stage in favour of a Long Instruction Word (*3,*4) implementation.

Today's short descriptions about the Z22 (like its English Wiki entry) are often taken from the first paragraphs of the instruction encoding section of the internal operations manual, translated to English, using more common terms like here (from Wikipedia):

[I have already corrected this on the English Wiki page, but there are many other pages carrying the same error]

It was programmed in machine code with 38-bit instruction words, consisting of five fields:

The corresponding part of the manual looks like this: 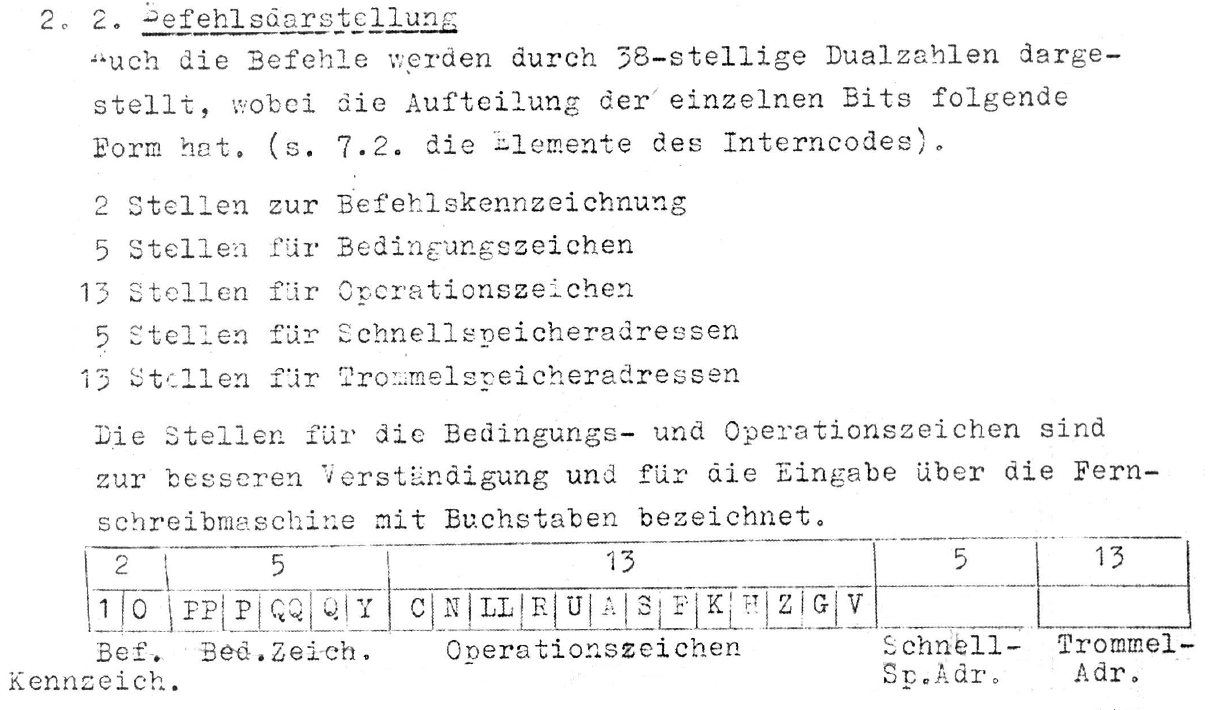 Looking closely shows a classic translation error, as Bedingungszeichen (condition symbol(s)) and Operationszeichen (operation symbol(s)) in this context are plural not singular (*5), so these fields are not holding single symbols, but collections of symbols that can be combined at will.

What all of these short descriptions leave out is how the manual continues over two dozen pages to describe the operations in detail. Already the very next paragraph (*6) points out the ability to combine:

So with this knowledge, it should better read:

It's important to know that while the 5-bit fast storage field addresses a core memory location, it's not a different address space. It's part of the regular address space(*7). The core can also be addressed using the memory address as it occupied the first 32 memory locations. So this is rather a way to have two addresses in a single instruction. Think of it like having registers in memory (*8).

Also, the 13-bit memory address should always be seen as such. While it was located on a drum, part of it could be upgraded to core - with the Z23 - increasing access speed and removing the need to arrange instructions and data in special patterns to reduce access time.

But back to instruction encoding. Instead of having a short unique code for each legal operation, there are separate bits for each functional unit. Although this sounds like a waste of memory, a memory word was 38 bits anyway, giving plenty of room.

The 18 bits were organized as

The condition symbols can be freely combined. If more than one is set, all conditions have to apply (conjunct). As a special case PPQQ is true if the accumulator content is zero. Memory location 2 is a generic scratchpad register, but also serves as persistent flag for conditional tests (*9). Memory location 3 is another special location (*10), as its lowest bit can be tested for set (condition Y). Each and every combination is possible. PPQQY for example would execute the instruction only if the accumulator is zero and the lowest bit of location 3 is set, a condition that could be true after a shift left from accumulator and loc 3 when the accumulator held the most negative number.

Now for the operation symbols:

All of these operations could be combined in a single instruction - albeit with restrictions. In fact, some seemingly 'basic' instructions had to be synthesized. For example, there is a single bit shift right (R), but no single bit shift left. Only a double shift left (LL). A single bit left shift had to be synthesized as LLR - to ease programming, the Assembler offered the pseudo operation L, which got translated into LLR.

Speaking of assembler, with such a component-based instruction set 'kit' the mnemonics itself are not fixed instructions, like we're used to today, but any combination of above operations, represented by its letters. By convention, they are written in the sequence they occur in the bitfield:

Although any sequence is valid (they are parallel in nature (*11)), sometimes a different ordering may improve reading.

Especially the last one would imply a real inflation of opcodes in today's ISAs, wouldn't it? It also shows some of the redundancies of instructions. For example clearing the accumulator can be achieved in many ways - like NA 0, NI <any value> and so on.

It would be possible to go on for hours, so let's close with some fun combinations around address calculations:

So yes, much like Wilson assumed, building instructions from smaller operations is an incredible tool (*12), but it quickly gets out of hand. The Z22 uses 18 bits for encoding, but I doubt that there are more than a few hundred useful instructions. Even if it's a thousand, encoding them in a single opcode would need more like 9-10 bits instead of 18. Do the math.

Still, learning the details may be a good idea for everyone designing a new CPU. Design your operational units, link them up in a Z22-like manner and work out whatever useful combinations there are, before 'compressing' them into common opcodes.

*1 - Unlike the name suggests, the Z22 was not solely Zuse's brainchild, but imagined by Theodor Fromme (today maybe called design lead) with much help from Heinz Zemanek and Rudolf Bodo (both from the Mailüfterl team) and made the schematics for the Z22. The idea was to design the tube-based Z22 in a way that it may be transistorized later. Which happened with the Z23. Quite remarkable foresight at the time.

*2 - Like having Register 0 always produce the value 0, or having streamlined cycle, being the same for each and every instruction - even implementing the instruction pointer by inserting an addition - and many more.

*3 - This is related and the base of today's VLIW, except the VLIW definition used today is (usually) based around the idea of packing several, independent instructions into a memory word to increase throughput.

*4 - Make sure to not mix this up with synthetic instructions, which nowadays is just a fancy name for opcode synonyms.

*5 - Zeichen (Symbols) is the same in singular as well as in plural. Context defines what is meant. Here it's plural, to turn it singular an indefinite article needs to be added - much like in English - except modern English also (almost) always additionally adds the suffix 's' to the plural.

*6 - The pitfalls just taking a single table which gets translated later without looking at the whole document. Classic :(

*7 - Somewhat like the 6500's zero page addressing, where the first 256 bytes of memory get preferential treatment.

*8 - It's the very same idea as DEC used a decade later for the PDP-6/10/20 series. A short addressing form to have the few memory locations serve as registers. Then again, DEC let customers pay extra for a 'fast register option', which the Zuse had build in :))

*10 - While the fast memory address range is 32, only 14 of it is filled with RAM (25 with a separate available core extension, item#11), the rest are special locations

*12 - Did I already mention the incredible way of conditional debugging? There is the Z bit to stop any operation before execution, but in addition there's the option of adding the C(constant) bit to any jump (E), an otherwise useless combination. Now execution will stop before the jump is taken but only if the console switch bedingter Stop (Conditional Stop) is set. Turning on debugging with the flip of a switch :))

37
What "unusual" syntax assembly languages are/were there?
19
Does any computer resemble the model taught in UK secondary education?
17
Why are PDP-7-style microprogrammed instructions out of vogue?
14
Has there ever been a instruction set architecture that did not require instruction decoding at all?

22
Why does the Z80 include the RLD and RRD instructions?
10
Which CPUs had instructions leaving data registers in an unspecified state?
10
What was the main purpose of bitshift instructions in CPU?
6
How does the floating point conversion in Zuse's machines work?
10
Was there a Western computer with blatantly missing instructions in the instruction set?
17
Why are PDP-7-style microprogrammed instructions out of vogue?
2
What early computers were only able to print numbers?
0
How do multi-byte instructions work?
2
What's with the TX-0 punchtape instructions?