The IBM 650, announced in 1953, was the world's first mass-produced computer. It represented numbers in decimal, which is understandable, both because it needed to work with exact money amounts, and because converting from binary to decimal for output would have been computationally demanding by the standards of the time.

It represented decimal numbers in bi-quinary form, which requires seven bits per digit, as compared to BCD which requires only four bits per digit. the technical limitations of the time make this choice more rather than less surprising; when bits are implemented with vacuum tubes, three extra bits per digit is a highly nontrivial cost.

What was the reason for using bi-quinary?

Quibbling about the right meaning of "bit" aside, some advantages of the 2-of-7 biquinary representation are:

These advantages are not governing anymore, since transistors are pretty reliable and individually cheap. On the other hand, memory (whether in the form of register files, caches, or conventional) has come to dominate the hardware budget compared to ALUs, which means that the greater compactness of base-2 is a much larger consideration.

I will just explain what a bit is. It's a binary digit. 0 is numerically zero, 1 is numerically one. If you want to add 1 and 1, in binary it overflows. the result is 0, and a carry out. As you understand, other arithmetic operations can be done on bits. They take a fair bit of logic to implement. Binary is positional. That means that a 1 which is 4 places from the right is worth 24 = 16.

Biquinary is not based on this idea. Biquinary is based on the idea "let's count from zero to four and then also flipflop to another state where we're counting instead from 5 to 9". Just like we humans count to five on one hand, and then count to ten on another hand. Or an abacus, that has four beads on one part of the rod, and one more bead on the other part. Now, how that's implemented in the IBM 650 is with binary states (not binary digits!) to say which of {0,1,2,3,4} is true, and which of {range(0..4), range(5..9)} is true. This implementation of biquinary is two "one-hot" signals. That means that a 1 which is 4 places from the right is worth either 0+4 = 4 or 5+4 = 9.

A binary state is different from a bit, as it is one of true or false. true and false cannot be added. true and false are just the values represented in some way, often by whether or not a current is flowing.

The biquinary tubes in the IBM 650 have a similar arrangement. So don't think about it as "seven bits", but as "one decimal digit", whose implementation involves seven electrical contacts which are very cheap. The tube stores or treats one decimal digit. And it is the tube which incurs the cost.

Can you see? These are not bits because the word bit actually means "treat me as a base-2 digit". They are more like selectors. One selector says "I am one of zero, one, two, three and four". Another selector says "I am whatever the other guy said plus either zero or five". You can't add or subtract these selectors, or do any arithmetic on them, so these "selectors" are much, much cheaper than a bit in something like a modern computer.

These seven electrical signals together make up a decimal digit. And they correspond to seven "legs" on the bottom of the vacuum tube.

If you look at the table above, you can see that if you want to (for example) add two numbers, the process will naturally yield some kind of carry. It will flip the high/low pair between true false and false true, and will tell you which way it flipped. Now you know whether you've got to carry one to the next digit.

That arrangement is much simpler to implement than BCD which you mentioned it your question, where to figure out if you have a carry, you have to check if the (binary) addition got a carry, and if not, compare with 1001, and if higher carry one and then subtract 1001, otherwise carry 0. Biquinary addition is much cheaper. Especially if you use the vacuum tube that counts to five and flipflops between high and low.

This isn't intended as an answer per se, but I want to provide some support for OmarL's explanation by quoting official documentation for the machine, which speaks of binary values as units of information rather than as digits of a base-2 number.

Here is how the IBM 650 Customer Engineering Manual of Instruction describes the machine's representation of numbers:

A recorded magnetic spot is essentially a binary storage device, because it may have either of two magnetic polarities depending on the direction of current flow through the writing head at the time the spot is written. Polarization in one direction is take to mean a binary 1, while the opposite direction means a binary 0. Some system must be used so that a combination of these binary devices can represent the decimal digits 0 through 9.

Figure I-1 shows how the bi-quinary system combines several binary 1 indications from two of seven parallel devices to represent each of the ten decimal digits. In the case of the read and punch buffer storages, the binary devices are recorded magnetic spots on seven parallel tracks. Successive 1 indications from the various combinations of two of the seven tracks during successive digit time intervals will indicate serially the decimal values of the digits of a word. In the case of the arithmetic units the paralleled binary devices are capacitor storage units. Seven parallel capacitors are used to represent each of the ten digits of a word. Each row is tested at its digit time by impulses from a drum-driven timing ring. Binary 1 indications from two of the seven capcitors will indicate the decimal value of the digit.

Figure I-2 shows how the two-of-five system combines different binary 1 indications from two-of-five parallel devices to represent each of the ten decimal digits. This system is used only for general storage largely because of the saving of heads and circuits that it affords. This system requires that all information entering general storage passes through a seven-to-five conversion matrix and that all information leaving general storage passes through a five-to-seven conversion matrix. 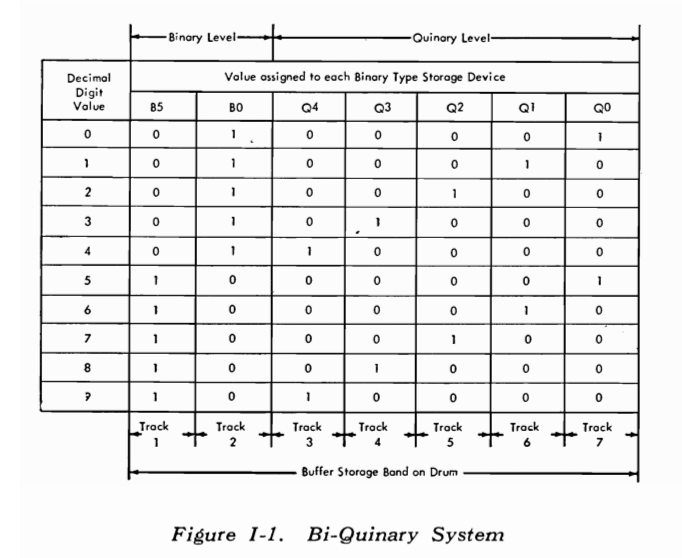 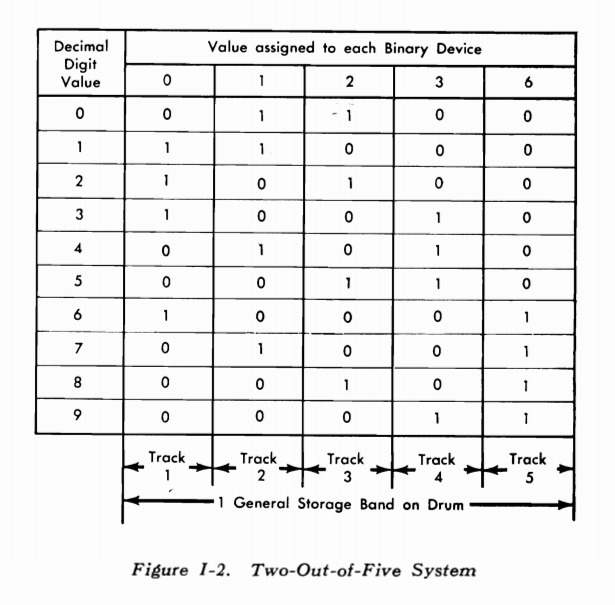 Note that it doesn't speak of binary digits at all. It does use 1 and 0 to denote the states of binary devices, but they aren't interpreted as numbers.

That document also includes many schematics and diagrams that you might find interesting.

Here is what the IBM 650 Operation Manual says:

When this code is used, all digits 0–9 are represented by the combinary of one binary unit and one quinary unit of information (Figure 13). Because of this condition, it is possible to check for valid information. This checking is known as validity checking and will be discussed under that topic.

Signs of numbers are translated internally into a digit 9 for plus and a digit 8 for minus to enable ehecking of their validity. 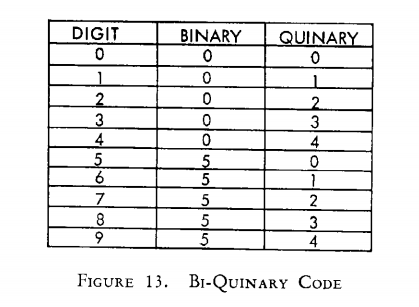 The term "bit" is mentioned but not used.

Note that from an information-density standpoint, ternary notation would in many ways be ideal, since a pair of one-of-three selections would require six valves, which is the same number that would be required to hold three bits, but would have nine available states rather than eight. Using 36 valves as twelve one-of-three selections would allow a system to select one of 531,441 different states; using 38 valves as nineteen bits, by contrast, would only allow selection of 524,288 different states despite the fact that it would need two more valves. Using five valves to hold a one-of-five selection yields an information density lower than binary (a one-of-five selection is equivalent to 2.32 bits, but would take as many valves as storing 2.5 bits), but if one needs a circuit to hold 3.32 bits of information, using a bit plus a one-of-five selection will be cheaper than using four bits but only using them to hold a one-of-ten selection.

Not the answer you're looking for? Browse other questions tagged history hardware early-computer ibm650 biquinary or ask your own question.

16
How does a biquinary adder work?
5
Were any decimal-based computers capable of handling text?
5
Why did the Burroughs 205 not use bi-quinary like the IBM 650?

28
Why did connecting the IBM PC 3.5" FDD backwards cause the problems it did?
38
Why did so many early microcomputers use the MOS 6502 and variants?
28
Why does an instruction include the address of the next instruction on the IBM 650?
8
Were there any working computers using residue number systems?
4
IBM 650 - how many logic gates?
14
Did the Samsung SPC-650 have any hardware or firmware differences to the genuine Sinclair Spectrum+?
1
Why didn't the Whirlwind I use a high persistence crt or something?
32
Did IBM originally plan to use the 68000 in the PC?
22
When did the IBM 650 have a "Table lookup on Equal" instruction?