There's an application that's been on my mind on and off for months now, I want to find clarity.

Once upon a time, when MacOS was in black and white, there was a neat music composer/player application. Its icon was that of a ghetto blaster, and its file icons were cassette tapes (obviously). On the floppy were also some demo tunes including "Money", "Louie Louie", (possibly?) "Three Little Mice", "Axel F" (from the comedy movie with Eddie Murphy), "Rockit", "Like a Virgin", and others. It was able to do four voices of various instruments, and had one "synth" instrument where you could (theoretically!) draw a waveform with the mouse; many of the demo tunes had clearly digitized samples in the synth to do proper drums and such.

I frequently think of MusicWorks (by MacroMind), but that's a different application ... I think?

MusicWorks Hayden Software 600 Suffolk St. Lowell, Massachusetts 01853 USA $46.00
The disk opens with an icon of a "ghetto-blaster" and a files icon of a cassette; we sense we are in a fun time. If today is like practically every day since MusicWorks' release, then at this very moment someone is probably uploading yet another MusicWorks tune to Compuserve or any one of hundreds of other bulletin board systems and databases. 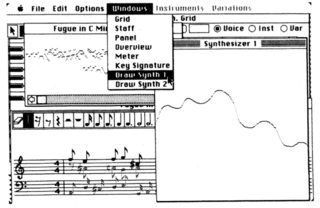 This application can be seen and heard in action on several youtube videos: 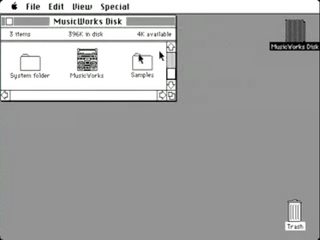 Although the document icons seem to be different: 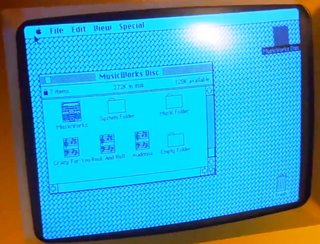 (click)
Mac Plus running MusicWorks after "Analog Board" recapping

And the mentioned "Rock It" is performed here

Macintosh SE - "Rock It"
Published on Nov 4, 2012
My old SE playing "Rock It" by Herbie Hancock, one of the built-in MusicWorks demos. Enjoy!

The application is actually one and the same as the one from MacroMind:

MacroMind was an Apple Macintosh software company founded in Chicago in 1984 by Marc Canter, Jay Fenton and Mark Stephen Pierce. The company's first product was SoundVision, a combined music and graphics editor. Before the release, the graphics editor was removed, and SoundVision became MusicWorks. Along with other early programs, MusicWorks was originally distributed by Hayden Software.

In 1988 the company moved to San Francisco, and in 1991 MacroMind merged with Paracomp to become MacroMind-Paracomp, then in 1992 merged with Authorware, Inc forming Macromedia.

And we all know who buried Macromedia.

If you can get to a library or institution with JSTOR access, this link will take you to a story that probably will give you your answer. (I don't have such access myself.)

The linked article is an overview of Mac music software circa 1985. It calls out MusicWorks, along with ConcertWare, MacMusic, MusPrint, Professional Composer, Song Painter, and Music Character Set. The Google summary of the page includes this snippet:

The disk opens with an icon of a "ghetto-blaster" and a files icon of a...

...but that doesn't appear on the free page, so I can't tell which one has this icon.

Not the answer you're looking for? Browse other questions tagged mac-os-classic application-program or ask your own question.

7
Building hello world on a Macintosh IIfx with mpw
7
SheepShaver failing to install application; Not Enough Memory
5
What are some names of professional music software for the Macintosh Classic / SE?
4
My Macintosh SE will not boot to hard drive. Can I boot from ROM?
12
What was the significance of the cursive 'ƒ' in an application name?
2
Programming on Macintosh Centris 610
3
68k macintosh lowmem system globals
5
Macintosh System 6 on Quadra?
6
How can I debug a Mac OS Classic application?
4
Send serial data to Macintosh SE?