This question is about computers with front panels that use only toggle switches for input of binary data (such as address and data values), as opposed to keypads for numerical input or other methods.

On these front panels, as well as state set by ON-OFF switches as above, there's a need for momentary-contact switches for "commands" such as examine, deposit, reset, start/run, and so forth.

In the 1950s either push buttons, such as on the IBM 1620, or momentary-contact toggle switches (that spring back to "off" when released), such as on the PDP-1, were used, depending on the manufacturer and model:

But by the 1970s, it seems that momentary-contact toggle switches were by far preferred over push buttons, both for minicomputers such as [various versions of the PDP-8] and the Data General Nova and [Nova 3], and microcomputers such as the Altair 8800, IMSAI 8080, and Altair 680: 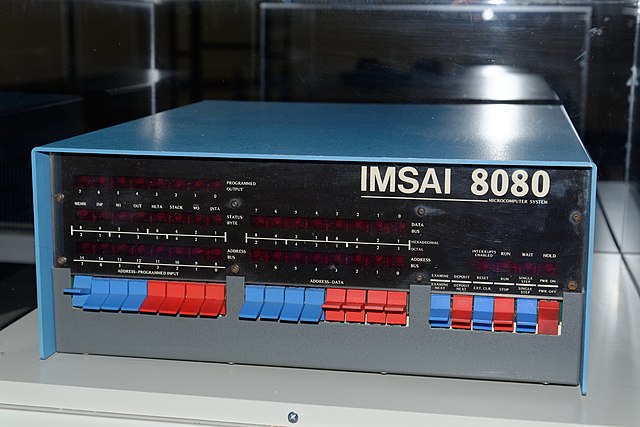 (Above, the left-hand two banks of eight switches are standard ON-OFF toggle switches for address and data input. All of the right-hand bank of six switches, except for the right-most POWER switch, are two-way (ON)-OFF-(ON) momentary toggle switches for functions like EXAMINE, EXAMINE NEXT, DEPOSIT, RESET, etc.)

In at least the case of the Altair 8800 and the IMSAI 8080, these momentary contact toggles were still (mostly two-way) SPST switches, no different electricially from normally-open push buttons.¹

Was there any particular technical or ergonomic reason for this seemingly wholesale move to toggle switches, or was it just chance or fashon?

¹ See the bottom centre of the schematic on PDF page 25 of the Altair 8800 Theory of Operation Manual & Schematics. S4 is an SPST momentary-contact toggle switch; S5 and S6 are three-way toggles (resting at centre, with momentary up and down) which are effectively a pair of SPST switches sharing a common terminal. For all of these one terminal is grounded by Q̅ from the run/stop flip-flop (upper left) when the system is stopped. A line connected to the other terminal, normally held high by a 1K pull-up, is momentarily brought low when the switch is held. This signal is debounced by half of a 74123 dual pulse generator.

There are usually multiple contacts made when a switch is operated (it's called bounce). Debouncing a large number of (SPST) pushbutton switches is difficult (requires lots of components, or even a short computer program), BUT if you use a double-throw switch (SPDT), this can be accomplished with a S-R flipflop. The S-R circuit is simple, early integrated circuits could incorporate several such (the SN7400 NAND chip makes two S-R flipflops). More info hereset-reset flipflop debouncing.

So, a toggle switch with a buckling-spring mechanism (a "microswitch" of the SPDT type) with a bit of electronic support, made a noise-suppressed logical input, ideal for the front panel switch application.

Only a few (strobe-generating) functions really required good debouncing, but once you designed such switches into the front panel, it was convenient to use lots of identical ones, for noncritical functions as well.

On these front panels, as well as state set by ON-OFF switches, there's a need for momentary-contact switches [...]

Was there any particular technical or ergonomic reason for this seemingly wholesale move to toggle switches, or was it just chance or fashion?

It's all of the above (and more), with technical/design being the lead.

(It helps to keep in mind, for all of these points, that basic on/off have to be toggle switches to begin with - using arresting push buttons would be ratehr expensive)

And yes, it's as well about design and ergonomics:

I used a PDP-11/45 a bit when I was an undergrad. I also used a few computers with some manner of push buttons, including keypads, on their front panels.

The one thing I liked about the 11/45's front panel was that eventually I was able to change multiple switches at once, or sequence switches.

There were also likely design decisions. If you look at the IMSAI 8080 front panel, the on-off and momentary contact switches are similarly designed.

Keep in mind that fingers aren't all the same length, and trying to press multiple buttons is really only possible of the buttons are on a flat surface, like a modern keyboard. With with toggle / paddle switches, you can (and I learned to quite well) change multiple switches with much less effort.

So ... while not one of the people who actually made that design decision, that was my experience.

Not the answer you're looking for? Browse other questions tagged front-panel or ask your own question.