Were there ever any dumb terminals in a portable form factor?

I’m curious if there was ever a case of a company making some sort of serial ASCII terminal, but in a portable factor, such as a laptop or even reasonable luggable. I’ve seen plenty of portable devices with a terminal emulation functionality, but I’m more curious of devices designed specifically for that purpose.

if there was ever a case of a company making some sort of serial ASCII terminal, but in a portable factor

Well, it all depends on the definition of dumb, portable and terminal. Let's go with the most common definition:

A prime candidate would of course be the TI Silent 700 series of transportable printing terminals. Some with integrated modems and battery packs, so as portable as it could get in the 1970s.

such as a laptop or even reasonable luggable.

They have been available in any size, from luggable to fairly small. 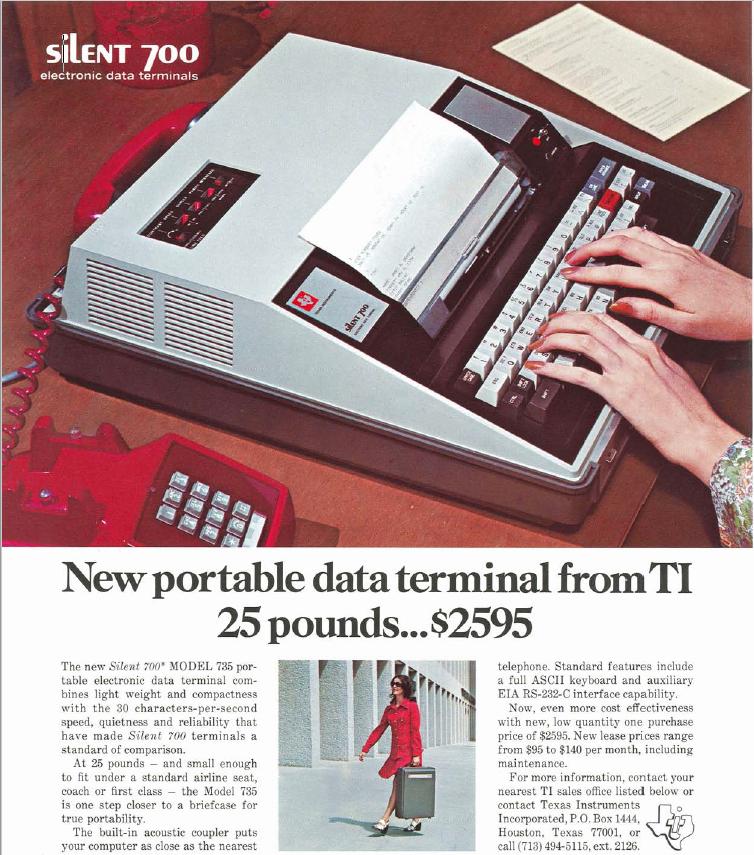 While the original 1971 Silent 700, like the above 735 were quite a large beast, weighting more than 10kg, later models, like the shown 745 (below) became barely larger than an average typewriter. They were an all in one mobile solutions including an acoustic coupler or integrated modem and (optional) batteries. 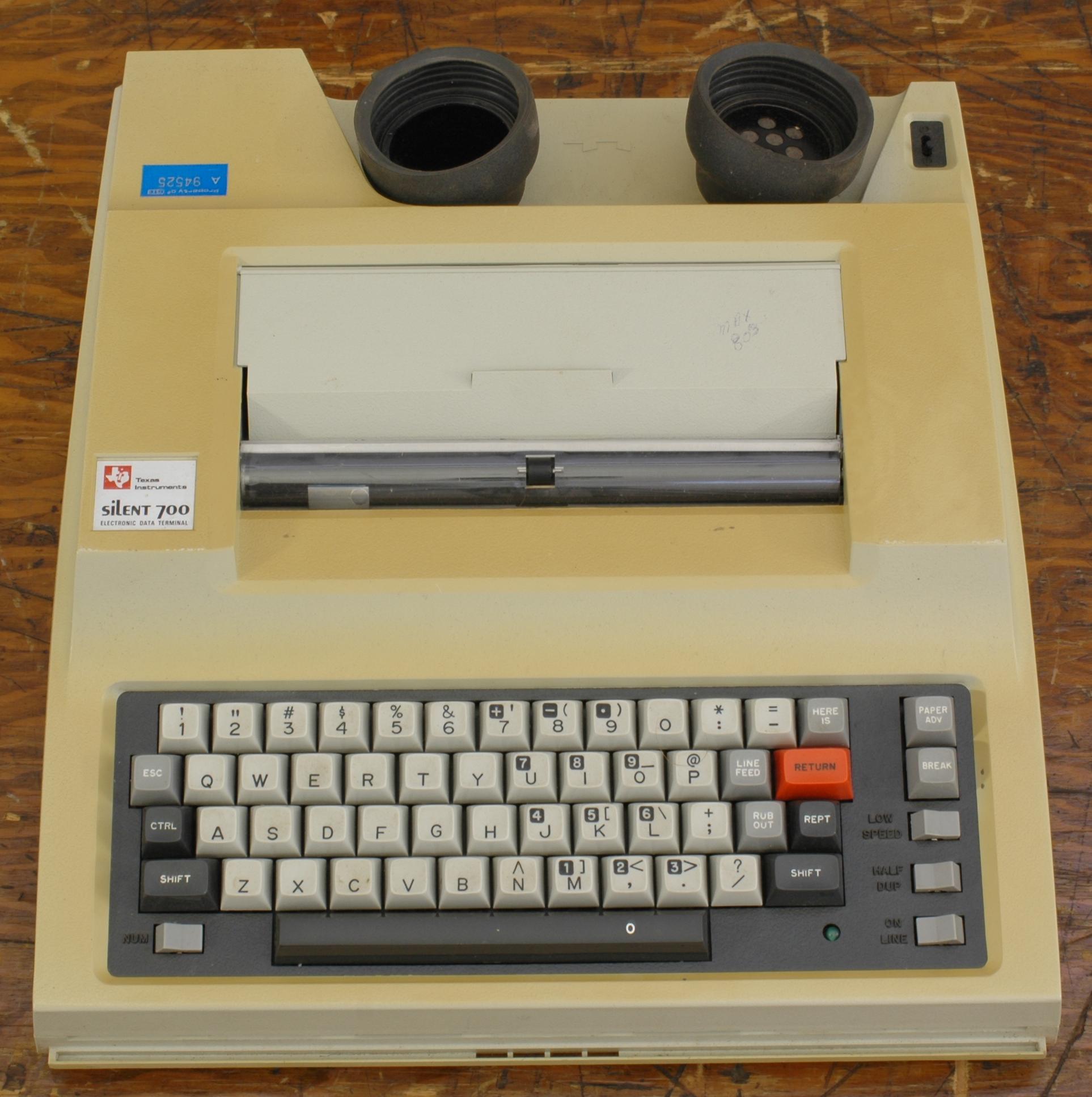 Later models were even smaller. The 700 series was produced all the way into the mid 1980s.

While TI had a quite strong stand in the market for portable terminals, they were neither the only or even the first. Computer Transceiver Systems Execuport series, starting with the Execuport 300 in 1969 beat them by more than two years. They as well sold units way into the 1980s - the last development was an improved Executell 400, introduced as late as 1982(!)

While such terminals have usually been a nice for specialized manufacturers and often been sold as part of turnkey solutions, computer companies did offer such systems as well, like DEC with their LA12 series. 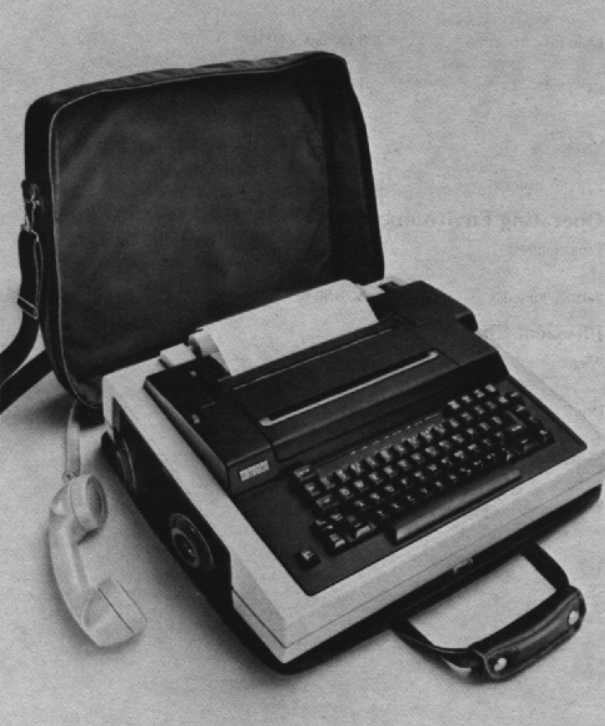 but I’m more curious of devices designed specifically for that purpose.

There has been quite a use case for them. Think insurance agents, mortgage brokers or even car dealers meeting their customers at home. With a terminal and a phone line they could not only show some glossy paper advertisements, but generate an offer right away.

Keep in mind, there were no portable computers in the 1970s - at least not in a way that would allow use like today's laptops. A small printing terminal could fill the gap by connecting to a central system providing the functionality. The salesman only had to key in the customers data and not only get a tailored offer (*1), but with printout for the customer or even print the contracts right away, closing the sale in one visit.

A CRT based terminal would have been way to heavy, eating up too much power and at the same time still needing an additional printer to fulfil the same role. It wasn't until Kyotronic style handheld devices (Olivetti M10, Tandy M100, Epson HX20, etc.) began to take over that niche by not only using lightwight LCD, but as well putting the needed computing power and data storage right into the same suitcase. 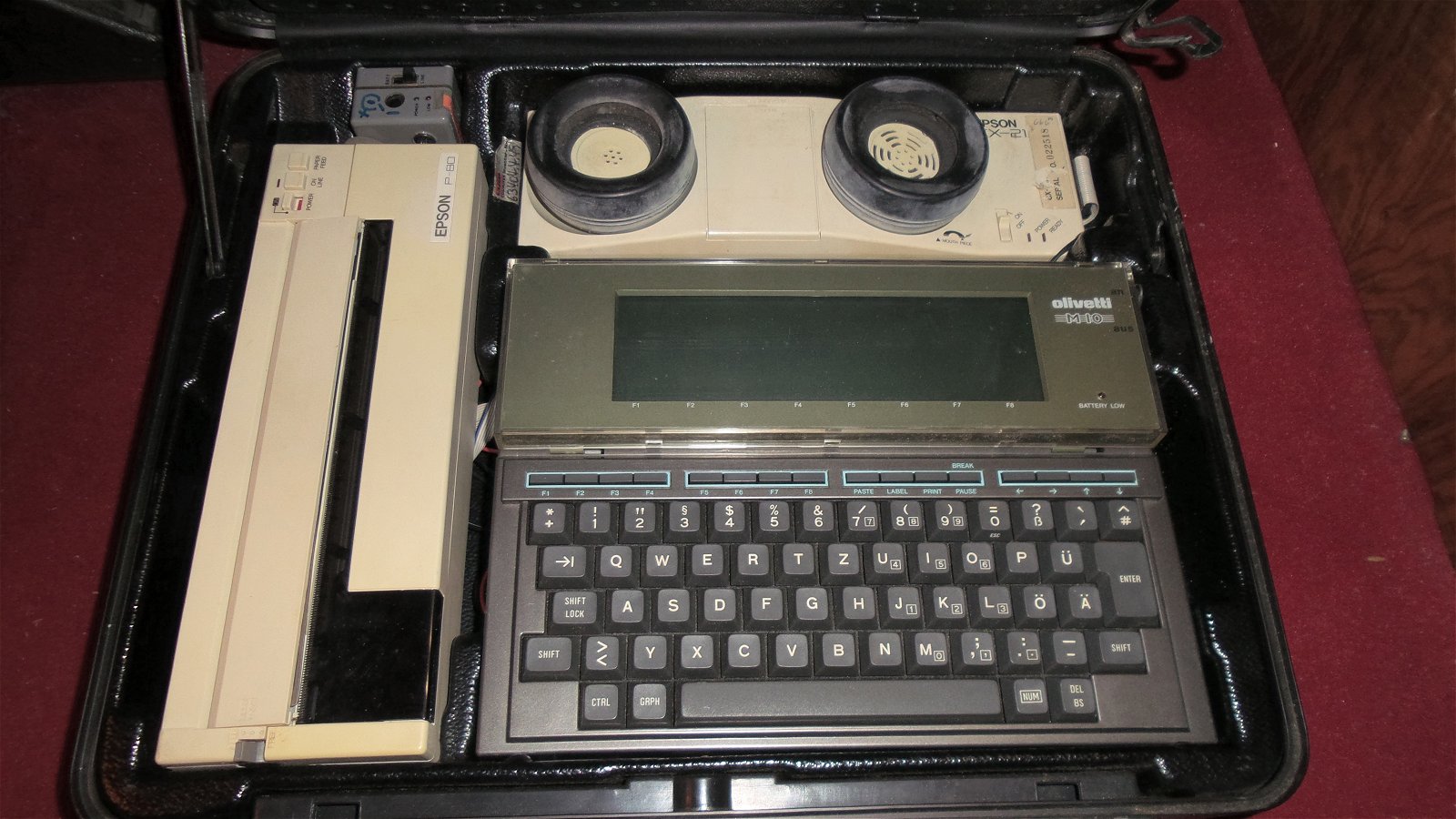 (Field Service Terminal as used by Nixdorf in the mid 1980s)

The Termiflex was a handheld terminal that was introduced in 1979. It was very cumbersome to operate as it had a very limited keyboard and could only display a few characters at a time. It looks like refurbished ones are still available. 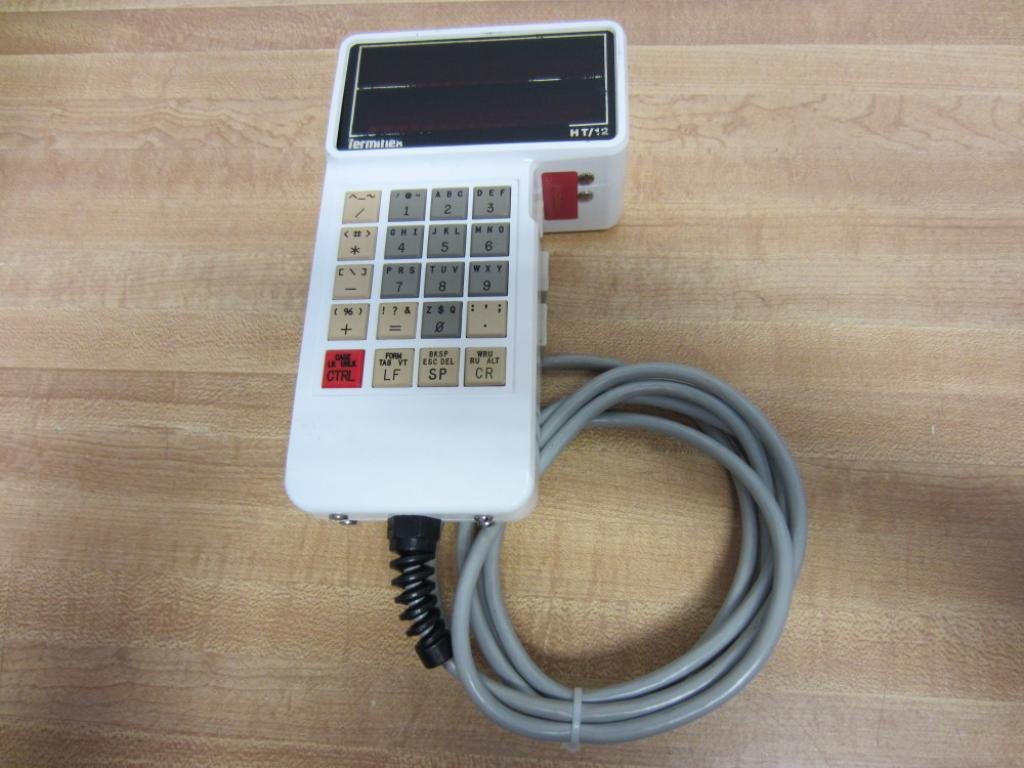 On page 44 of his book Unix: A History and a Memoir, in the context of a photo showing Thompson and Ritchie next to a PDP-11 around 1972, Brian Kernighan briefly mentions an experimental portable terminal built from a modified Teletype Model 33 teletypewriter. The keyboard and printer were in a suitcase-like container weighing 55 pounds (25 kg), with a built-in acoustic coupler for dial-up connections. Kernighan used the portable terminal from home a couple of times.

Although not a commercial product, at CDC Jock Hill developed several prototypes of a portable PLATO terminal.

The devices, which for years were carried around the world for demos, featured an 8"x9" 512x512 orange glow plasma display, a keyboard, an acoustic coupler, and a phone headset for dialing into PLATO. These terminals became available in the early 1980s but I have no information on the exact timeframe.

Source: Chapter 22 "The Business Opportunity" (Part III) of the book The Friendly Orange Glow, The Untold Story of the Rise of Cyberculture by Brian Dear.

To complement the answer by "henros": the French Minitel had various versions. The Minitel 5 build by Matra was a portable terminal. 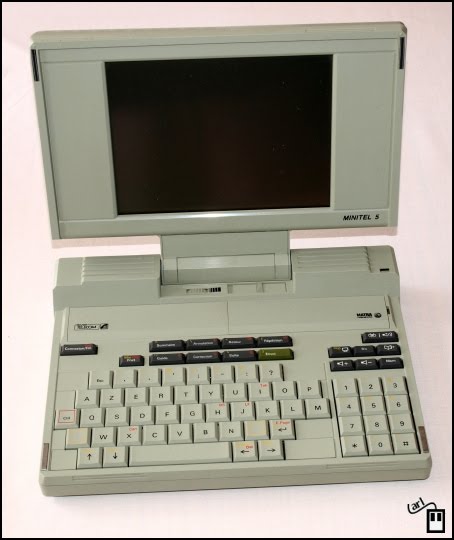 The French Minitel system seems to fit this description.It was a highly successful serial communication system which predated the Internet. Plenty of information available - start with Wikipedia: https://en.wikipedia.org/wiki/Minitel.

I have a Brother EP-44 electronic typewriter in my collection - it doesn't have its own built-in modem, but it can be connected to one using serial cable. It can also be connected directly to a computer using serial (null-modem, IIRC) cable and used as a dumb terminal or a serial printer. It can also be used stand-alone as a typewriter that can print either immediately on key press, small (about a dozen) character buffer for editing typos, or typing in memory about a page of text. It uses four D-cell batteries, has a carrying handle, and is about the size of a thick 4:3 14" laptop - probably about as portable as one can get. It was produced in 1984 and was one of the last electronic typewriters by Brother that had serial port and could be used as a terminal. Here are some pictures and description: https://typewriterdatabase.com/1984-brother-ep44.5403.typewriter 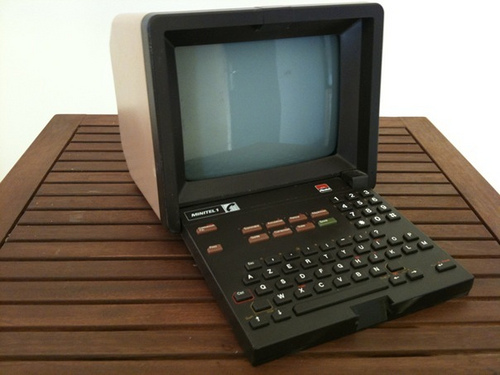 Dumb, connected and portable. Most models had a handle on top.

The RCA VP 330x series were keyboard-only terminals intended specifically to be plugged in on-site to existing televisions. They were generally advertised with the unit shown inside a briefcase to indicate their portability.

Not the answer you're looking for? Browse other questions tagged terminal portable or ask your own question.

48
What is a Dumb Terminal?

7
How were terminals connected to a PDP-11 computer?
8
Why was the VT05 resolution 72×20?
9
What did order processing on a teletype look like?
5
What were the characteristics of the Siemens 8160 and 9750 terminals?