I have a wonderful Zenith SupersPORT 286 laptop (ZWE-0200-40) whose power circuitry seems faulty and it no longer powers up. I have useful material on the disk which I'd like to extract. 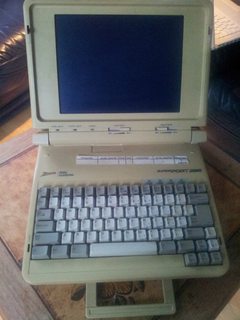 The disk (a Connor CP-343) interface is pre-IDE, and I can't seem to locate what type of interface it has.

Can anyone suggest how I might spin up the disk and image it? It's only about 40Mb, so less than a modern memory stick.

Very helpful pointers from everyone. I'm almost at the point where I should probably spawn a new question rather than add more details. Anyway: yes, there is a daughter board with the disc controller: 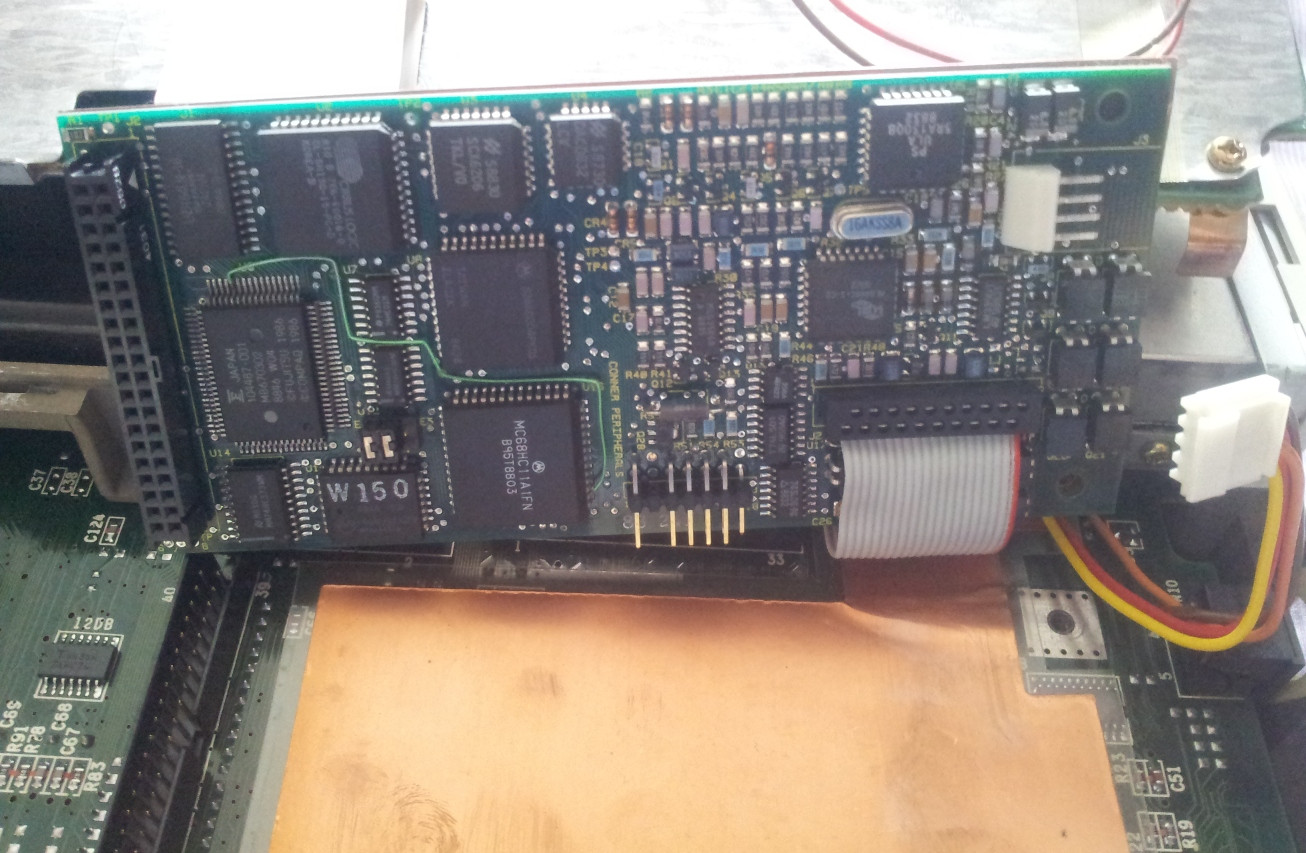 The board has a female IDE socket rather than a male IDE connector, and a power connector.

I do have a male-to-male gender changer for IDE and an IDE-to-USB converter and a molex to floppy power connector. I checked the wiring as per the usenet postings linked by @mnem and I think they are right. However with a quick attempt I do not get disk power up, but get very hot chips on the controller board. Sigh.... 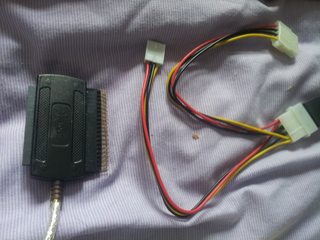 Yes: I realise I can cannibalise several scrap models, but at the moment I have found none on my continent at reasonable shipping prices or costs now they are museum pieces! I have a fair degree of experience at restoring older systems. Its just this form of disc interface is unknown to me.

As far as I know, all of those models, either the 386 or 286 variants, all used ESDI disks. I'd like my assertion to be proven by a photo of the drive connections, and (ideally) what it plugs into on the computer itself.

These drives have built-in controllers, but the adapters are quite special; I think you are looking at finding an Adaptec or Western Digital adapter (which will probably be ISA), and a compatible PC. As pointed out in the comments, some adapters might use the MCA bus, so this could complicate finding the right hardware match.

ESDI uses complicated daisy-chained cables with terminators, and each drive has to be addressed properly. Depending on what we find once we hook up the drive, we might have to worry about drive geometry and hard vs. soft sectors.

Older Windows might work to actually spin up and read the drive, but I suspect using BSD or Linux (both of which have ESDI support as a kernel default or compile option) might be more useful because there will be lots of tinkering.

You could also consider sending the drive off to a data recovery service.

Ok, based on the pics I have to amend or delete my answer. This appears to be an ATA/IDE drive made specifically for Zenith for this model of computer.

So, it probably requires a custom XT/ATA 20-pin adapter of some sort, probably only from Zenith. The adapter will be on the laptop motherboard or perhaps underneath the keyboard.

Based on that last link, you might be able to tear the special adapter out and use it to hook up a regular IDE adapter on any Linux box to the laptop drive.

That Conner CP-343 drive appears to be a special snowflake, but it's not. It's actually a standard IDE drive, with one exception. That 20-pin interface you're looking at isn't the IDE connector; it's the connector between the drive mechanicals and the controller board that would normally be mounted to the bottom of the drive. Why it's not affixed to the bottom of the drive as normal for IDE drives I can only guess. (Space saving considerations? Reducing the weight of the drive assembly for shock resistance?)

The best information I've been able to find indicates that at the other end of that cable you should find the actual controller board for the drive, plugged into a standard 40-pin IDE socket on the motherboard. You should be able to remove the controller from the IDE socket and plug it into a standard IDE cable in another machine to recover the data.

Note that the IDE connector on the Zenith SupersPORT 286 laptop is slightly non-standard, but that should only affect things if you're trying to get another drive working with the laptop itself and shouldn't make a difference for recovering data from the CP-343. Discussion of Zenith IDE interface.

EDIT: It looks like the CP-343 itself is slightly out of spec for IDE. I found a reference to this in the document I linked before "Pin 39 on the CP343 must be HIGH if BUSY" and checking the IDE spec, pin 39 is normally active-low. I think an inverter might have to be added on that line to get this drive to work on a standard IDE interface.

Something else to watch out for, although I think you have the SS286, not the 286e so you should be okay:

Warning about USB to IDE converters and early (before 1995 or so) IDE drives:

Those USB adaptors will kill most early IDE drives, I don't know if that's the only reason but early drives used ALE on PIN 28 (goes to ISA BUS ADDRESS LATCH ENABLE) then it was redefined to SPSYNC:CSEL (Spindle synchronization/cable select) and some drives support SPSYNC but not Cable Select, others support both modes. On ATA-2 and newer drives it's always CSEL and it must be grounded to set the drive as MASTER which the USB adapter does to be able to read a drive witouth having to change it's jumpers in case it was set to cable select.

Also "modern" mainboards with PCI solts or PCI IDE controllers can have this pin grounded or have a jumper to select between ATA-1 or newer drives. I've seen boards with the jumper pads on the PCB but never one with the jumper pins fitted. Other mainboards have electronic switching and can set it depending on BIOS settings or guessing the kind of drive with IDE IDENTIFY command, I don't know for sure.

Using a IDE extension cable with the wire from PIN28 removed or well cutted and isolated may prevent those damages but I'm not 100% sure, use as a last resource only

I've tested that with good results on the opposite case: to connect modern drives and Compact Flash adapters on old mainboards which otherwise won't detect any drive

In case of doubt or valued data it's better to use a 286/386/early 486 board to read those disks, or any computer which can be fitted with and ISA IDE or MULTI I/O card.

There are still lots of early ISA MULTI I/O boards for sale online with at least one IDE and one floppy ports (some will have also IDE 2, Floppy 2, PRINTER, COM1, COM2, GAME...) based on GoldStar, NEC, UMC or Winbond chips which can read any of those early drives if supported by the computer BIOS or using drivers to bypass BIOS limits.

Please note that some 8 BIT ISA boards can be XTA instead of IDE, or have jumper(s) to switch between IDE and XTA, and boards made by hard disk manufacturers can be custom for specific drive models only.

One strategy is to find a similar, working laptop on your favorite auction site, plug the old hard drive in, then use a laplink cable (null-printer cable) to transfer the files to another computer using Interlink, or a null modem cable to transfer them with your favorite terminal emulator (I used Telix and TeleMate).

Not the answer you're looking for? Browse other questions tagged disk-drive hard-disk 80286 or ask your own question.

6
How to access old laptop IDE hard drive
15
Where can I find an external 8-inch floppy disk drive?
7
Where can I find a Windows 10 driver for old Syquest Drives?
7
Compaq Contura Aero 4/33C - moving data to CF/IDE disk - No operating system detected
8
How do I connect an IDE hard drive to an Amiga 4000 tower?
13
Old Conner IDE hard drives that are mistakenly detected as being 2TB, how do I connect to and image them?
7
What is the floppy disk port pinout for the NEC PC-8001mkII?
12
How do you send code to a Commodore disk drive and run it?
5
How can I tell if my old PC supports > 137 GB hard drives?
24
How did Commodore drives produce program listings from disk directories?