Why can't VirtualBox install drivers for Windows 95B?

When Installing this version of Windows in QEMU, it works just fine and it will install all the drivers, no problem. Also, this only happens with Windows 95B. Windows 95C has no problem with the drivers or installation. 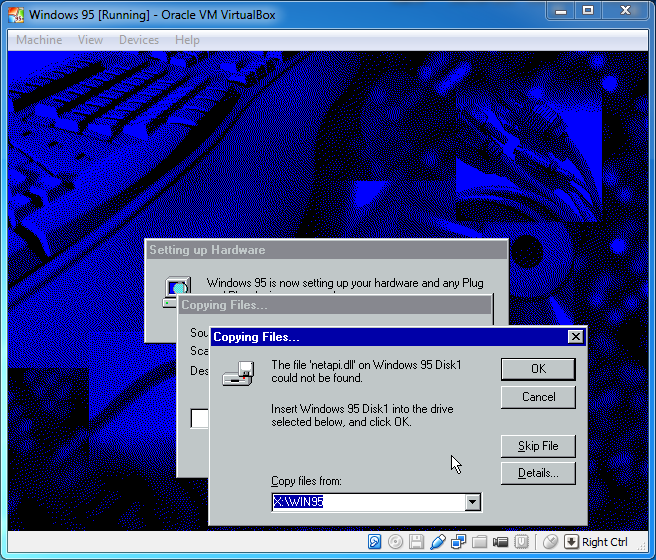 Assuming you are installing from scratch the first phase runs under a stripped down version of Windows 3.x which runs under the DOS environment you (or the autoexec.bat on your boot media) launched the installer from.

The system then reboots and the second phase runs under the newly installed Windows 95 system.

There are three main causes of failure to find files from the CD during the second phase of the install.

All of these problems can be avoided by copying the WIN95 directory from the CD to the C: drive and launching the installer from there rather than running it from the CD.

Ignore the disk numbers; that is a red herring. The WIN95 directory on the CD is equivalent to the full set of installation floppies.

I know what the issue is. It asks for multiple disks (Disk 1, 2, ...18, etc) which I apparently don't have. The reason why Windows 95C doesn't have this issue is because it's all packaged together on one disk, which in that case is the installation disk.

4
Using a NeoMagic 256XL with Windows 98SE
30
Why didn't PostScript eliminate the need for printer drivers?
6
Logitech drivers from Windows 95 Installer on the actual disk
3
Where can I find Windows 98 drivers for VIA sound card VT8237A/VT8251?
7
Was there a hard disk format countdown easter egg hidden in the Windows 95 installer?
6
How can I install debug VXDs from the Windows 98 DDK?
5
Where can I find Windows 3.11 drivers for my Video Blaster capture card?